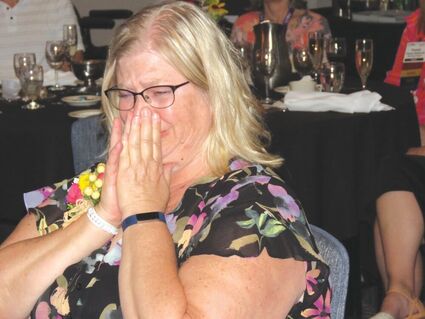 Surprise • SAM publisher LuAnn Schindler reacts as her name is announced as the National Federation of Press Women's Communicator of Achievement. The presentation was made Friday, in Fargo, North Dakota, during the organization's annual convention.

LuAnn Schindler of Clearwater received the 2022 Communicator of Achievement Award from the National Federation of Press Women. This prestigious award has been given for 65 years.

Schindler received the honor during a celebration at the organization's annual conference, held June 23 to 25, in Fargo, North Dakota. Now in its 85th year, NFPW is a nationwide organization of professional women and men pursuing careers across the spectrum of journalism and communications.

The Communicator of Achievement Award is the highest honor bestowed by NFPW upon those members who have distinguished themselves within and beyond their field. The recipient, chosen from nominees selected by state affiliates from around the country, is recognized for exceptional achievement in the communications field, as well as service to NFPW, the affiliate organization and community.

Each affiliate can choose one COA nominee, and a previous nominee can be named by an affiliate again, as long as she has not been honored as NFPW's national COA winner. All nominees must also be living members, in good standing for at least two years in an affiliate and NFPW.

Nebraska Press Women submitted Schindler's nomination form, which included a summary of vital information about her professional, community, and NFPW/affiliate service, a narrative with no more than 2,400 words, endorsements for the nominee and two samples of the nominee's work.

At Friday's award ceremony, she credited Evelyn Aufdenkamp, a news editor of one of her hometown newspapers, and her father, Lamont Larson, who was her high school journalism teacher, with sparking her interest in news.

Schindler grew up in Clay Center. Two publications were printed there weekly.

At a career day, during her junior year in high school, Aufdenkamp gave Schindler her first assignment.

"She told me I could write about anything," Schindler said.

She chose to write about her family's friendship with Cornhusker football players I.M. Hipp and Andre Franklin.

"She even let me write in first person, which you wouldn't traditionally do on front-Page news," Schindler said.

Schindler taught journalism, English and speech, or a combination of the three, at Wauneta/Palisade, Wausa, Norfolk's Lutheran High Northeast and O'Neill St. Mary's.

Schindler's students qualified for state speech and placed in the top 10 in state journalism contests.

Summerland Superintendent Kyle Finke, wrote, in his nomination letter, "LuAnn possessed a desire to teach students to be accomplished writers and speakers. She shared her writing passion with her students and provided young learners the chance to develop into community members.

After 25 years of teaching, LuAnn left the classroom and moved into the newsroom, becoming managing editor at the Clearwater Record/Ewing News while also writing a column for the Creighton News.

"I went to work on a Wednesday and was told tomorrow is your last day," she said.

She was 57 and went home with no job, but her loving friends changed her thinking and encouraged her to start the newspaper she had always dreamed of.

Schindler pulled together different ideas, researched, developed a business plan, ran it with past colleagues, and took a chance.

She started a new weekly newspaper in a community already covered by another publication in a nearby town. Schindler's weekly covers Clearwater, where she resides, Orchard, Ewing, Page, and Royal.

The five communities in her coverage area were scheduled to join together into a new school district - the Summerland School District - if the bond passed. Schindler believed the people had the right to be given as many facts as possible to make an informed choice. On July 25, 2019, Schindler's birthday, the Summerland Advocate-Messenger was formed.

Schindler immediately began focusing on the school board election scheduled for November 12, 2019, merging into one with a school building "in a cornfield" between Clearwater, Ewing, and Orchard.

The Summerland Advocate-Messenger, named for early papers in the area, covered all the details about the new school. Schindler wrote a story about the co-op's cross-country program, which drew 12 athletes in its first year, two of whom qualified for state. She also wrote about another cornfield school in Polk County, where educational opportunities grew once the schools combined.

Former principal of Clearwater Public School, Mike Sanne stated, "What I appreciated most about LuAnn was her commitment and attention to accuracy and detail regarding her writing to inform the public of what was said and done. So many people had misinformation about this project, but LuAnn wrote lengthy and detailed stories and headlines in her paper. Her goal was to get the facts out there. Her journalism skills are not her opinions; but rather the actual information at the time, presented at either the public information meetings or regular and special school board meetings. The information was meticulously recorded and written, so accuracy was of utmost importance. I truly believe her journalism skills had a direct impact on the $34 million bonds that were passed. That is the biggest compliment I can give her regarding her journalism skills. She reports the news, she does not make the news."

Mike Tabbert, producer of the "Rural is Cool" podcast, said of Schindler, "When she is not focused on the Summerland Advocate-Messenger, she can be found as an active member of the Clearwater Chamber of Commerce, a founding member of the Clearwater Historical Society, at any of the local soup suppers, volunteering at community celebrations, selling raffle tickets for the Sons of the Legion, or cheering on her grandchildren."

"She gives with all her heart and soul and loves, lives, and breathes the community," said Lauren Sheridan - Simonsen, Clearwater economic development director.

Schindler talked to Simonson-Sheridan, and together, approached the village board to plant the seeds for placing flower planters at Main Street businesses.

"LuAnn loaded buckets of water on her husband's side-by-side vehicle and watered the plants at 6 a.m., before the blistering Nebraska heat arrived for the day," said Tamara Bearinger, co-owner of a Clearwater accounting service.

Schindler has served as a Chamber of Commerce officer for four years, and member for nine years. Typicallly, during the three-day event, Schindler can be found at the rodeo grounds, taking photographs and videos of the annual event.

She has also been the Clearwater Public Library Trustees president for nine years, helping to develop the website and promote the library through her paper.

A founding member of the Clearwater Historical Society, LuAnn was inspired by a 1916 brick building at the end of Clearwater's Main Street. An editorial written in SAM inspired the townspeople to join the effort, launch a nonprofit and raise funds for renovations..

As well as a devout member of Clearwater, Schindler and SAM sponsored Ewing's 150th+1 celebration and concert last summer. She stepped up to match an additional 10% of sales at Dusty's in Orchard, to boost the donation made to the local Summerland School TeamMates mentoring program.

When Covid-19 hit, the young newspaper lost some advertising accounts. Schindler and staff member Elizabeth Odell came up with a creative solution to fill an empty office in their building. Thus, "the sidebar" was born, offering crafters and artists space to sell their wares.

In Schindler's first year of entering NPW's Professional Communications Contest, she placed in 10 categories, gathering four first place and four second place awards, which was enough to be honored with a third-place trophy in the Marianne Beel Sweepstakes. A year later, she joined the National Federation of Press Women and earned multiple national awards.

Schindler has served the Nebraska Press Women in a variety of roles, including newsletter editor.

Lori Potter, NPW president, said, "Very few members knew enough about technology to do the graphics and Page design, so her toolbelt of journalistic skills was put to use quickly. She did this even while handing the endless duties of a weekly newspaper editor," only resigning after the Summerland Advocate-Messenger was launched.

LuAnn continued entering NPW's annual professional contest where she won the First Place Sweepstakes trophy twice and took second place three times, with top entries moving on to the NFPW competition where she took home a total of 20 awards.

Continuing with her dedication to NPW, LuAnn became a regular in NPW conference programs. She presented a session on "How to Enter Contests" in 2017, hosted a 2018 conference in Neligh, where she organized a workshop on producing video on a smartphone. She continued her work by hosting a panel titled "News Start-Ups" at the 2020 virtual conference.

"Schindler is the true personification of a community newspaper publisher and editor. Her work reflects the integrity of her belief that newspapers must cover the news in a fair, comprehensive, and impartial way; yet, the overall newspaper product shows her pride and compassion for the people and community in which she serves," stated Dennis DeRossett, executive director of the Nebraska Press Association.

"LuAnn exemplifies the person the Communicator of Achievement award is meant to honor - that is, a community journalist whose passions for a free press and for publishing a quality newspaper make a positive impact on the lives of her readers and the community. LuAnn Schindler truly deserves the highest recognition this national award is meant to bestow," DeRossett concluded.