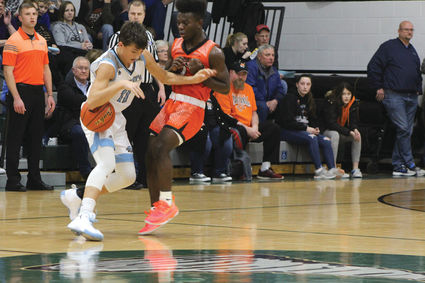 Carry the ball • Summerland's Mason Hoke protects the ball from Aaron Chishiba during Friday's game with Osmond. The Bobcats struggled to find the hoop during the 60-10 loss. Hoke scored two points and grabbed one rebound in the game. The Bobcats were scheduled to play Elkhorn Valley, Tuesday evening and will meet Wausa, Thursday evening, in Orchard.

H/LHF took charge in the first quarter, sprinting to a 23-3 lead. They added 19 in the second quarter, while the Bobcats scored eight points.

In the third quarter, H/LHF outscored Summerland, 19-6. The Bobcats poured in a dozen points in the final quarter.