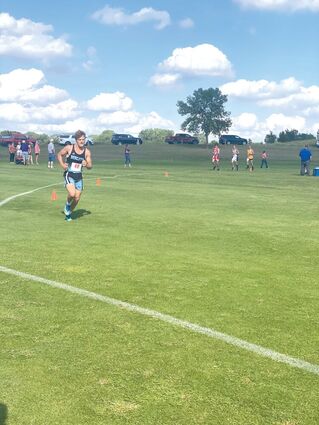 Round the bend • Jesse Thiele finishes the first lap around the Calamus Golf Course, at Burwell, last Thursday. Thiele missed the medal contention in the cross country meet, finishing 17th. The Bobcat boys' and girls' teams will compete at Beemer, Sept. 1, in the Wisner-Pilger Invite.

Summerland cross country runners didn't let the heat get to them, Thursday, as temperatures pushed into the low 90s at Burwell at the Calamus Golf Course.

The Bobcat runners were paced by Aislynn Kester, who finished 12th, and Carlee Livingston, 13th. Kester ran the course in 21:24 and Livingston, 21:37.

Both athletes said they felt good about the first outing for the 2022 season.