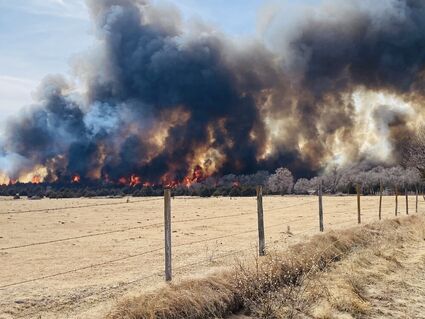 Up in smoke • Trees and brush burns, Sunday, near the Holt and Knox county line. Fourteen volunteer fire departments responded to the blaze, which stretched from west of Verdigre to northwest of Page. Nebraska Forestry Service employees, based in Valentine, monitored the area Monday.

The 911 call came in shortly after 3 p.m., Sunday, March 20: a wildfire sweeping across ranchland between Page and Verdigre, along the Holt and Knox county line, near 509 Avenue and 875 Road.

While the fire began in the Verdigre fire district, it jumped into the Page district at some points.

Page Volunteer Fire Department was called to the scene at 3:24 p.m., according to chief Rod Isom.

Initially, the fire moved northwest and moved quickly. Weather conditions created a perfect storm for the blaze to build, as temperatures reached the mid-70s and strong southerly winds averaged 25 miles per...