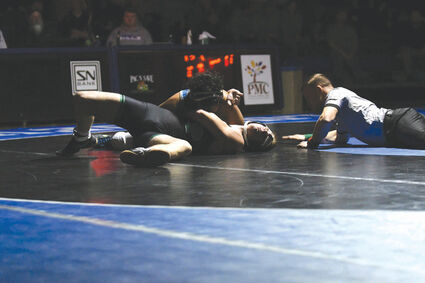 Grind and grit • Alex Arroyo pins Wisner-Pilger wrestler, Kristian Oeverjordet, during a match in the 182-pound division at the Wayne triangular. The Bobcats defeated the Gators and lost a dual to the host school.

In its season opener, Summerland's wrestling squad won one and lost one at the Wayne triangular, Thursday.

Against Wayne, the Bobcats earned wins in four matches. Alex Thiele defeated Ty Zach, by fall, in 3:57. They competed in the 132-pound division.

At 152, Keaton Thiele picked up his first win of the season. He pinned Francisco Jinez De La Rosa, by fall, in 3:17.

Colton Thiele started his senior season with a 1-0 decision ov...