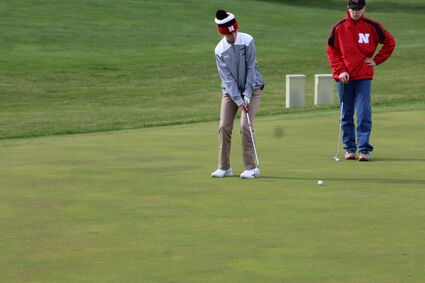 Putt it in • Avery Cheatum taps the ball toward the green, Thursday, during a triangular with EPPJ and CWC. She led the Bobcats with a 54.

Paiton Hoefer carded a 47 to lead the Elgin Public/Pope John golf team to a first-place finish during triangular with Summerland and Chambers/Wheeler Central last Thursday.

The Wolfpack ended with 203, followed by the Bobcats, who finished with 231.

CWC did not place in team scoring, as only three golfers competed.

Scores for other members of the EPPJ squad include Skyler Reestman, 48; Austin Good, 51; Linus Borer, 57 and Layne Bullock, 63.