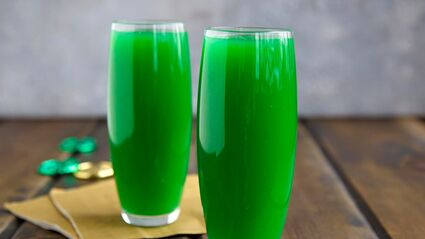 March 17 is just a week away so it's time to get ready for St. Patrick's Day.

But first a bit of history (thanks history.com):

St. Patrick's Day observes of the death of St. Patrick, the patron saint of Ireland. The holiday has evolved into a celebration of Irish culture with parades, special foods, music, dancing, drinking and a whole lot of green.

St. Patrick's Day is celebrated annually on March 17, the anniversary of his death in the fifth century. The Irish have observed this day as a religious holiday for more 1,000 years. On St. Patrick's Day, which falls during the Christian season of Lent, Irish families would traditionally attend church in the morning and celebrate in the afternoon. Lenten prohibitions against the consumption of meat were waived and people would dance, drink and feast on the traditional meal of Irish bacon and cabbage.

St. Patrick, who lived during the fifth century, is the patron saint of Ireland and its national apostle. Born in Roman Britain, he was kidnapped and brought to Ireland as a slave at the age of 16. He later escaped, but returned to Ireland and was credited with bringing Christianity to its people.

In the centuries following Patrick's death (believed to have been on March 17, 461), the mythology surrounding his life became ever more ingrained in the Irish culture: Perhaps the most well-known legend of St. Patrick is that he explained the Holy Trinity (Father, Son and Holy Spirit) using the three leaves of a native Irish clover, the shamrock.

More than a century later, homesick Irish soldiers serving in the English military marched in New York City on March 17, 1772, to honor the Irish patron saint. Enthusiasm for the St. Patrick's Day parades in New York City, Boston and other early American cities only grew from there.

Now that we know why we are celebrating, let's work on the menu. Let's start with a traditional Irish Stew and classic Corned Beef and Cabbage. Then we'll add a couple of green treats and a drink or two. Sound good? I think so.

Traditionally, lamb shoulder chops or leftover bits of beef are used to make this peppery stew. In this recipe, flavorful lean beef is simmered with vegetables in an aromatic broth. The long cooking time brings out all the subtle flavors of the meat and vegetables, while the potatoes retain their texture and shape.

3 cups onions, peeled, cut in half and thinly sliced

Preheat the oven to 350 degrees F.

On the bottom of a 3-quart casserole dish or heavy pot with a lid, spread half the potatoes, onions and carrots. Season heavily with salt and pepper. Top with 6 sprigs of fresh thyme or 3/4 teaspoon of dry thyme. Place the blade steaks or chops on top of the vegetables. Top the meat with the remaining potatoes, onions and carrots. Season well with more salt and pepper. Top with remaining dry thyme.

Cover the stew with the beef broth and enough cold water to barely cover the top layer of vegetables in the pot. Place the lid on the pot and cook for 2-1/2 hours until the meat and potatoes are fork tender.

Remove the meat, potatoes, and vegetables from the pot. Discard the thyme stalks if using fresh thyme.

In a small bowl, blend 3 tablespoons of flour with enough water to make a smooth paste. With a wire whisk, blend the flour mixture into the hot broth. Stir well to dissolve the mixture. Place the pot on the stove and bring to a boil. Cook the sauce for 3 to 4 minutes until thickened. Season with salt and pepper.

Place the potatoes, vegetables and a piece of meat on plates or in large bowls. Top with sauce and garnish with fresh chopped parsley.

This traditional Irish favorite is a one-pot, complete meal that is so easy to prepare, you won't want to save it for just the wearing o' the green.

Slice brisket across the grain. Mix butter and parsley; brush on vegetables.

Everyone will be dancing a jig after one delicious bite of these minty green candy crunch clusters.

Immediately toss marshmallow mixture with popcorn; let cool for 2 to 3 minutes or until cool enough to handle. Toss with chocolate candies.

Recipe from: the Popcorn Board

For St. Patrick's Day, tint your cupcakes in shades of green with food color.

Bake as directed on package for cupcakes. Cool cupcakes on wire rack.

Scatter golden foil-wrapped chocolate candy coins over and around these emerald green crispy treats. You'll think you've found the Irish pot of gold at the end of the rainbow!

Luck of the Irish Crispy Treats

Line a 13-by-9-inch pan with foil. Lightly butter or spray foil with no stick cooking spray. Set aside.

Melt butter in large saucepan or Dutch oven on low heat. Add marshmallows; stir constantly until marshmallows are melted. Remove from heat. OR Melt butter and marshmallows in large microwavable bowl on HIGH for 2 minutes, stirring after 1 minute. Stir in vanilla and food color until smooth. Quickly add cereal to marshmallow mixture and stir until well coated.

Press into prepared pan using a buttered spatula. Cool. Cut into bars or use a shamrock-shaped cookie cutter.

Quench the thirst of your little leprechauns with green-tinted raspberry lemonade. 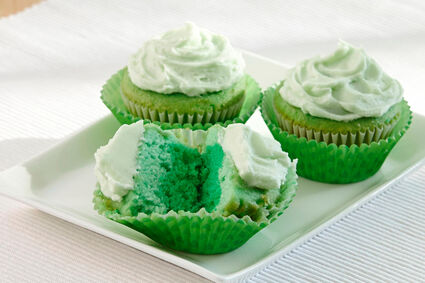 For St. Patrick's Day, tint your cupcakes in shades of green with food color. Green Ombre Cupcakes will add an extra spark to any holiday celebraton.

Mix all ingredients in pitcher. Serve over ice in beverage glasses.

Variations: For Strawberry Leprechaun Lemonade, use imitation strawberry extract in place of the raspberry extract. For a grown-up version, stir in 1/2 cup Limoncello.