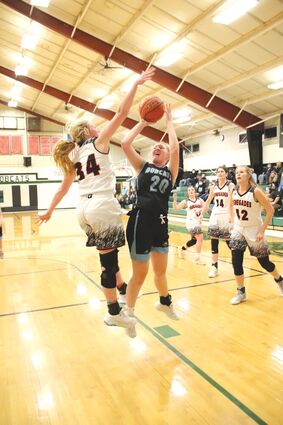 ake a shot • Maryssa Long sends a bunny shot toward the bucket, despite an attempted block by Tessa Metschke. The Renegades relied on strong defense to claim the Summerland Holiday Tournament championship, 42-27, when the teams met in Clearwater, Dec. 30.

In the championship game of the Summerland Holiday Tournament, against the Renegades, the Lady Bobcats were unable to come up with a redeeming win and lost 42-27.

Through the entire game, turnovers were an issue and limited the girls' offensive production.

The first quarter was tightly contested, with most of the Summerland points, against a tough CWC defense, coming from deep court.

In the second quarter, the Lady Bobcats were held to only four points and fell behind, 24-14.

After the break, the Lady Cats came out sharp and were able to cut the Renegade lead down to two points, 24-22,...