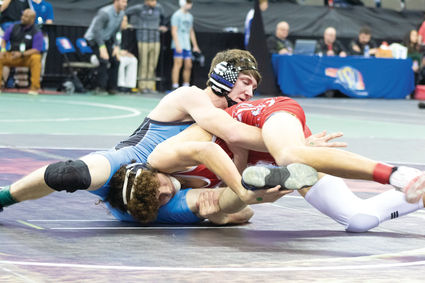 Rafe Grebin attempts an escape against Samuel Foster during an opening round match at the state wrestling championships, Thursday. Grebin lost, by pin, in 3:15.

Neither Colton Thiele or Rafe Grebin advanced to the medal round in their respective weight classes at the 2020 NSAA State Wrestling Championships, last week, in Omaha.

But Summerland head wrestling guru Dan Roeber said Thiele and Grebin gained experience that will be valuable when they return to the mat next season.

"Those guys represented us very well in Omaha. The outcome was maybe not what we had hoped for but, we will build off it for next year," Roeber said.

Grebin lost his first match in the 126-pound division to Samuel Foster, of Sutherland, who pinned Grebin in 3:15.