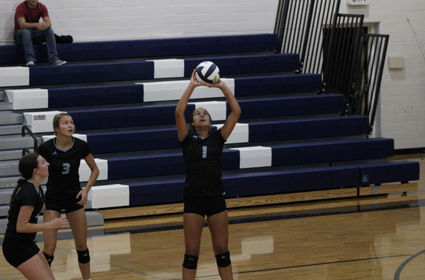 Set it up • Summerland Lady Bobcats finished 2-0 at the Bill Marshall Classic, held in Grand Island, Aug. 24. (above, l-r:) Kyra Nilson and Tiana Thramer watch Brenna Wagner send a pass to a front row hitter during a set against Axtell.

In their inaugural debut, the Summerland Lady Bobcats picked up two wins, Aug. 24, at the Bill Marshall Classic, held in Grand Island.

The Bobcats downed Axtell with identical scores of 25-20 in the first match.

Ashley Koenig sent eight kills to the floor, while Sidney Stallbaum pounded another seven down the line.

In the second match, the Bobcats made short work, downing Schuyler Central, 25-9 and 25-14.