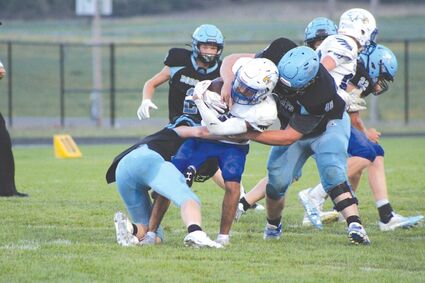 The Eagle has landed • Joe Ahlers pulls an unidentified Lutheran High Northeast player to the field during Friday's homecoming game.

Summerland's varsity football team moved to 2-2 on the year, following a 42-14 win over Lutheran High Northeast. The teams met on the Bobcat's home turf, Sept. 16.

The game was knotted after the first quarter, with each squad scoring six points.

Then, it was all Bobcats, as the home team scored 14 points in the both the second and third quarters to extend the lead to 34-6.

LHNE scored in the final quarter, as did the 'Cats.