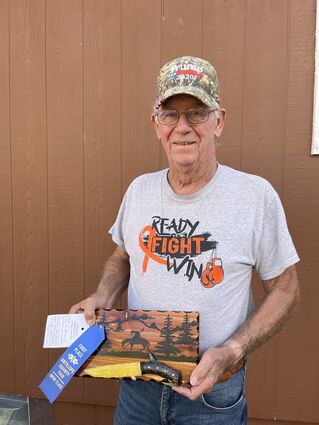 Top of the (open) class • Max Heiter, of Royal, entered a knife made from melted fiber optic lines and a deer antler, along with a woodburned plaque, in open class at the 2022 Antelope County Fair. Heiter's creation won first place.

Max Heiter, of Royal, took a project to the Antelope County Fair with low expectations. Later, he learned his open class exhibit received the first-place blue ribbon for the 65-and-over class.

It all started when Heiter saw a fiber optic knife made by someone on the internet a little over a year ago.

"I saw a fiber optic knife somebody made on the internet, so I get on the internet and looked for this fiber optic and I found it in Oklahoma," he said. "I thought 'I'm gonna try it; he did it, maybe I can do it.' Well I got about five of them (fiber optic slabs). The one knife didn't look too good, but I broke the other four. They break pretty easy, and I sent for some more. I tried again and that time I did a little better, then finally, I got so I could do it...I found out where to press on them and where not to, somewhat."

Over the last year, Heiter has been working on perfecting his knife-making skills, as well as experimenting with wood burning.

"I just started doing it (woodburning) to put this on (in the fair)," Heiter said. "I wasn't even going to take it (to fair) and then several friends of mine said 'Oh take it to fair, take it to the fair.' I said 'Oh, I don't know'. Well okay, I took it down there, and I never would have thought it would have gotten first place."

Heiter hasn't entered anything in the fair since he was in grade school. He noticed that there was a class for 65 and over, so he entered in that. Once he got to the fair, officials told him only one of the items on his project could be judged: either the woodburning plaque or the knife.

He had hoped to get the entire project judged so that is how he got placed into open class.

"It did better than I thought it would ever do," he said. "I never dreamed it would do something."

Heiter even mentioned people have asked him to bring another item to the fair next year.

The process of making a project like this is quite extraneous. Some of Heiter's friends gave him some wood, which he cut. He then used a torch to burn the wood and varnished it or put epoxy on to make a glossy appearance.

The knives are much more intricate to make. The handle is made from a painted deer antler, but the blade itself is made of fiber optic. In short, fiber optic phone lines are melted into a block then sawed. Heiter purchases the fiber optic blocks, which are like glass and are very challenging to chip. First, he has to chip all of the saw marks off the block, then he narrows the blade down with a pressure flake.

"You've got to go real slow because you've got to chip, turn it around because it's kind of like a half moon, then you chip that side and right in the half of the moon," he said. "You chip it again, turn it over then there's another half moon then you do that all the way down then you start narrowing it up and then start shaping the knife blade up."

After chipping it with a pressure flake, he eventually has to chip it by hand. He estimated it took approximately 10 to 12 hours for him to do the blade.

"I do it over a period of two or three days. My fingers begin cramping up so then I quit and start doing it again the next day," Heiter said.

One of his pieces brought $125 at the silent auction held during the Royal barbecue in July.

While all of his pieces have some insight to the Native American culture, he makes each piece different from the others.

"I've always been interested in the Indian culture, so everything I do usually has an Indian scene of some sort," he said. "I just kind of get an idea and I make every one different. Not one is alike, and I guess, I just start thinking about it ... it just keeps your mind working and keeps you doing something."

While Heiter has enjoyed this new hobby, he's already sold three of his pieces and hopes to continue making more in the future.

"It's just something I got into, and now I'm really into it," he said with a chuckle.