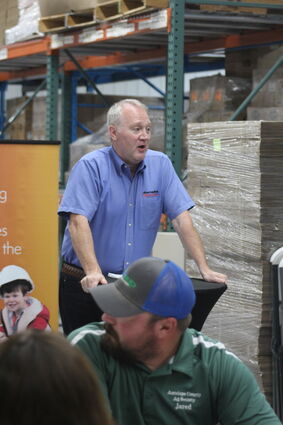 Building community • Jeff Yost, CEO and president of the Nebraska Community Foundation, addressesa crowd in Neligh, Aug. 15, who gathered to celebrate the completion of the Jim and Pat Blackburn Challenge Grant for the Neligh Area Community Fund.

Give a city a challenge and its people will meet it head on ... and then some. That's the sentiment expressed to more than 50 individuals who attended a celebration for the Neligh Area Community Fund, Aug. 15, at Blackburn Manufacturing in Neligh.

The reason for celebrating: the completion of the Jim and Pat Blackburn Challenge Grant. The Blackburns added $100,000 to the fund after its members raised $200,000. The $300,000 fund is part of the Nebraska Community Foundation and will draw almost 5% interest annually. The interest - which may total $15,000 - will be earmarked for public projec...