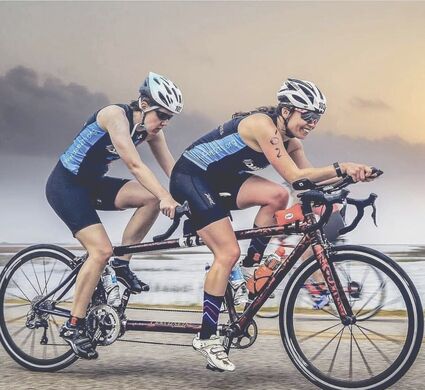 Pedal power • Caroline Gaynor and Randi Strunk compete in the bicycle portion of the Ironman 70.3 Texas 2017 race, a half-Ironman. The race was Strunk's first competition.

According to Nike, "The only one who can tell you 'you can't' is you. And you don't have to listen."

Taking that advice, Randi Strunk, 39, of Minneapolis, originally from Orchard, has overcome that mindset and will participate in her third full Ironman race, Sunday, Aug. 7.

The Ironman race will take place in Juneau, Alaska. The 140.6-mile race includes a 2.4-mile swim in Auke Lake, located near Mount McGinnis, a 112-mile bike ride along Glacier Highway to the final 26.2-mile run through the Mendenhall Valley. Participants will have 17 total hours to finish the race with a time restraint for each discipline.

"You have two hours and 20 minutes to finish the 2.4-mile swim," Strunk explained. "An athlete must complete the swim, transition to the bike and the bike course is usually between 10 hours and 10 hours and 30 minutes. Then to be considered an official finisher, you need to complete the whole 140.6 miles in less than 17 hours from when you started the swim."

While sports were never Strunk's favorite thing in school, she participated in them during junior high and high school at Creighton. In junior high, she played volleyball, basketball and track, then also played basketball her freshman year. Strunk said she struggled with sports as a young girl and it actually turned her away from athletics for a very long time.

"Once I found running and triathlon, it took a while to get over the idea that I wasn't an athlete," she said. "It's a continuous struggle as it's very easy to compare your workouts or race times to others, but I try to remember that I'm doing this for me and that's all that matters."

In 2012, Strunk started running and working out with a friend who was also a personal trainer. One day, her friend mentioned a triathlon to Strunk. Why? Her competitiveness. Strunk went home and googled what a triathlon was; the rest became history.

"I read all I could about it... We figured out how to do it together, and after the first one, I was hooked," she said.

Strunk explained that there are several different race distances. The most common include a sprint, an Olympic distance, half- and full-Ironman races.

Ironman Alaska is considered a full-Ironman race. She also noted that many people start with sprints and Olympics and work their way up or find a distance that they are comfortable with that can fit into their life in terms of training time.

Strunk enjoys the challenge of participating in triathlons, along with the camaraderie of the triathlon community.

"I like triathlons because I like to push myself," she said. "I enjoy the dedication to a goal and the satisfaction of accomplishing something. I also really love the triathlon community; they are so supportive and the people I've met through the sport are some of my best friends."

Strunk has been working with a coach, Robbie Bruce, for about three years. In preparation for Ironman Alaska, he writes a weekly training plan and Strunk follows the swimming, biking and running workouts he compiles.

Strunk's daily training consists of one to two hours a day, with longer workouts on the weekends. This averages about to around 10 to 12 hours a week until peak weeks of training, which turns into 14 to 17 hours a week dedicated to training. She trains year round, but she added that preparing for an Ironman race is usually a 16-week addition to the year-round base level training.

With around 2,500 to 3,000 participants, race day differs from training, especially with the fact that there are several other competitors and spectators.

"My favorite part of triathlons are the people, especially in longer-distance events," she said. "At some point, you are all suffering no matter how fast you're going it still hurts and you have other people out there pushing themselves."

Before race day, Strunk will prepare her body by drinking a "ton of water with electrolytes" to ensure she has enough sodium. Then on race day, she will wake up early and eat a high-carb breakfast a couple of hours before the race. Eating is not allowed during the swim, so Strunk said most of the food consumed is on the bike, so food can be digested prior to the running.

"I take a lot of my nutrition with me because I try to eat things I've practiced with in training," she said. "Having issues with food on race day can make for a very long day."

She explained the importance of drinking electrolyte drinks to replace sweat and says she tries to drink a few ounces every 10 to 15 minutes while on the bike and eat every 30 to 45 minutes. Stations are offered along the race route, stocked with Gatorade, water and food, every 15 to 20 miles on the bike course and every one to one and a half miles on the running course.

"My hands-down favorite thing to eat while riding is peanut butter and jelly sandwiches," she said.

When asked what thoughts go through her head while enduring the race, Strunk explained that she breaks the race up into smaller chunks because 140.6 miles can be overwhelming.

"I really try to stay in the moment," she said. "I tell myself in the swim to stay calm and steady, especially as you have other athletes swimming all around you, it's easy to get panicked or thrown off. On the bike and run, I just tell myself to get to the next aid station. Halfway and 80 miles on the bike are big wins, and so are halfway and single-digit miles left to go on the run."

Competitors at Ironman races often say, "Never trust how you feel in a particular moment during the race, it will probably change in 10 minutes."

Strunk said the day is long and full of several highs and lows, and sometimes it is difficult to keep going until getting more food and feeling replenished.

Strunk is the daughter of Jan and Terry Strope of Orchard. The Stropes will be traveling to Alaska to watch their daughter compete. They went to Strunk's first full-Ironman race in Texas in 2018.

"We have been to other short races also, but these are the 'monsters'," Jan said.

Between Strunk and the Stropes, none of them have traveled to Alaska before, so they are all excited to experience the beauty and wildlife that Alaska has to offer.

"It's so much more than just race day, I know she has worked hard and trained all year for this event, so it really is an overwhelming sense of pride and happiness for her as an athlete and also... our girl," Jan explained. "She has met so many, many wonderful people from all over the United States through these events; it's a very great network of support. I'm always very thankful if there are no injuries during training and especially race day, it's a grueling, long day."

Strunk's main goal for Ironman Alaska is to finish, have fun and enjoy the experience. She said there are several things that can happen out of her control, such as: weather conditions. She will take the day as it comes and will be grateful for the opportunity to race again. She's also looking forward to being surrounded by several supporting people.

"You are all striving for a common goal, but you have different reasons why you chose to embark on a triathlon journey," she said. "You make great friends at the end of a full Ironman, you encourage each other and swap stories about how you got there or why you're doing the race."

According to Ironman.com, Ironman events are held around the world all year long, but there are currently only 14 full-distance events in the United States. Sunday's Ironman Alaska has a 6 a.m. start time.

"I get to race an Ironman in Alaska and to do it the first year they've held a race there is pretty special," she said.

Pursuing a full-Ironman race is a huge accomplishment in itself, but Strunk is exceptionally talented by taking on this challenge with limited vision and no depth perception, which means she is legally blind. This means she will complete the course with her guide, Cheyenne. The two women will take on the race tethered together by a cord for swimming and running. They will then ride a tandem bike for the biking portion of the race. Another key to success is knowing how to communicate effectively with each other, which also motivates Strunk.

"I don't want to quit and I also race with a guide who has put in just as much work as I have, so I want to honor that," Strunk said.

"Truly anyone can do a triathlon," Strunk said. "I spent many, many years telling myself I wasn't an athlete, but if it's something you want to do and something you're willing to put the time into training for; it is 100% possible."