Hail to the (rodeo) queen 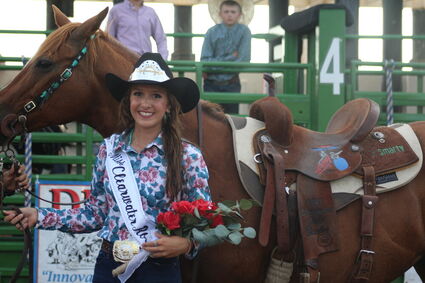 Royal welcome • Shilo Shabram, of Neligh, is named Miss Clearwater Rodeo 2022. The Neligh-Oakdale senior was crowned June 24, kicking off the 55th annual event sponsored by the Clearwater Chamber of Commerce.

Shabram has been involved with all things rodeo from a young age. She competed in the Boots and Saddles Club when she was six or seven. Then, she tried her hand at western pleasure and eventually, transitioned to poles and barrels.

Outside of the rodeo arena, Shabram is also an english rider, qualifying for the state 4-H horse show.

Shabram thought the Miss Clearwater Rodeo competition was fun. She also knew some of the other contestants so that helped her feel more comfortable.

"I told myself, 'I know what I'm doing, I just have to go out there and be confident,'" she explained.

While she stayed calm and collected, Shabram started to become nervous during the final moments before the 2022 rodeo queen announcement was made.

"I started shaking when they were announcing runner-up, but when my name was called, I was very excited and happy that my hard work paid off," Shabram said.

She thanks her biggest supporters: her parents Troy and Bobie Shabram, who are always ready to follow her on all her endeavors. She also gives credit to the people who helped her before the competition.

"I asked multiple people about the contest, how it was run in the past and general tips and tricks," explained Shabram. "I asked Josey Booth, Ashleigh Nelson, Ashton Werth, Amanda Sellin and Devon Baum. I would also like to give a special thanks to Emily Ahlers and Ashton Higgins for being there to help me every second and telling me to not give up."

Shabram does not plan on competing in any other rodeo queen contests, but she says her plans may change.

When asked how this award will change her future, Shabram responded, "This title will definitely keep me busy and I couldn't be more excited. This title will allow me to advocate- not only for the sport of rodeo, but also for the agriculture industry."

This year's Miss Clearwater Rodeo gives advice to other young women who would like to try for rodeo queen in the future.

"If you are wanting to try out for queen, reach out to a current or past queen and ask any questions...believe me, it helps," Shabram said. "Feel free to reach out to me if you have any questions. I also suggest starting small and working your way up."

Shealynn Rasmussen, of Burwell, was presented the appearance award.

Brooke Brengelman, of Albion, was named runner up.