Despite loss to Randolph, Titans continue to show improvement on the field 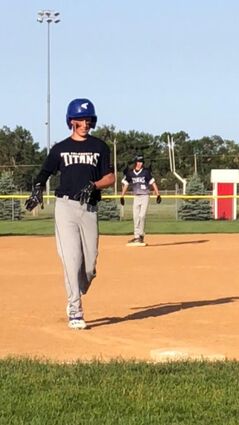 Rounding third • Wyatt Shabram runs to third base and Dane Miller lands on second base during a June 14 tilt with Randolph. Tri-County fell to the host squad, 14-17.

Coach Jeff Shabram said, "Again, this was versus a seniors' team, so no harm to our record. We can all be very proud of the way these boys played Tuesday night and the grit and determination they showed all seven innings.

The Titans held a four-run lead going into the bottom of the sixth inning, only to see pitching waiver down the stretch, with some inexperience sprinkled in.

"The Titans are definitely playing much more inspired baseball and are improving dramatically each game. Keep up the good work," Shabram said.

Wyatt Shabram was the starting pitcher, throwing four innings before being pulled on pitch count.

Isaac Pavlik reached base safely twice. Joseph Pavelka and Kaiden Bauer each safely reached base. Keenan and Landon McAllister, along with Riley Saul, each had clutch hits with runners on base, leading to multiple RBIs for all three.

"And the Titan defense was much improved again, with the highlight of the night coming in the fifth inning, dominated by Riley Saul," Shabram said. "Saul caught a rocket line drive and then threw across the diamond to double up the runner on third base. He then snagged a hard ground ball down the first baseline, leading to a groundout at first. Excellent job."

The Titans were scheduled to travel to Stanton, Tuesday, and on June 24, will play in O'Neill at 8 p.m.