March is perfect for slow cooking 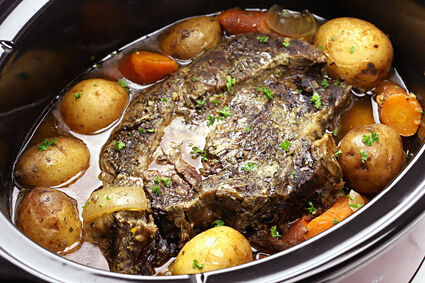 My first Crockpot - a three-quart avocado green model with a non-removable crock - came to me in the early 1980s when a friend who had recently gotten married regifted one of her five new Crockpots to me. It wasn't in its original box (so it couldn't be returned) and we suspected at the time someone had regifted it to the newlyweds.

I didn't care where it came from, I was just happy to have one. And the apartment in Lincoln where I was living at the time sported decades-old avocado green sculptured carpet, so it fit right in!

The first recipe I tried was for a pot roast with vegetables. I remember shopping for the beef roast (something I hadn't done much up to that point) and was pleasantly surprised to find one in the grocery store conveniently labeled "Crockpot roast." That made it easy.

Cooked with the traditional onions, potatoes and carrots, the roast was a success and now even all these years later, that's the only way I cook one. Only now, I use a rump roast, my Crockpot has grown from three quarts to five and it's blue, not avocado green. It also has a removable crock and I've always wondered why they weren't made that way right from the start. The original ones were a pain to wash.

If you are wondering what's the difference between a slow cooker and a Crockpot? Slow cooker is the generic term. Crockpot is a particular brand of slow cooker.

Slow cookers have come a long way since Rival introduced its original at the 1971 National Housewares Show in Chicago - harvest gold along with avocado green, the hot home decor colors at the time. According to "Smithsonian Magazine," advertising campaigns, along with word of mouth, drove sales in 1971 to "an outstanding $93 million four years later."

Their popularity has never waned, with more than 100 million sold over the years, although Crock-Pot's reputation took a brief "hit" a few years ago when it was revealed that a malfunctioning one caused the death of the Pearson family patriarch, Jack, on the popular NBC drama "This is Us."

From a "Vanity Fair" article published at the time: "'This Is Us' creator Dan Fogelman tried to quell viewers' paranoia on Twitter, writing after the episode aired that he wanted to take a moment to remind us that the machine responsible for murdering the 'World's Greatest Dad' was a 20-year-old fictional crockpot with an already funky switch? Let's not just lump all those lovely hardworking crockpots together.'

Alas, it seems his words were not enough, Crockpot was prompted to release an official statement in which it promised, seriously, that "your Crockpot won't kill you."

It wasn't long before the internet was flooded with decals designed for your home appliance featuring a picture of Jack (actor Milo Ventimiglia) with a reminder to "Don't forget to unplug me. Love, Jack."

But I still know people who are a little leery of them, wondering if they are actually safe to use given their low cooking temperatures and long cooking time.

According to Cami Wells, an extension educator with Nebraska Extension in Hall County, the slow cooker heats food slowly at a low temperature - generally between 170 degrees F and 280 degrees F. The low heat helps keep less expensive, leaner cuts of meat become tender and shrink less. The direct heat from the pot, lengthy cooking time and steam created within the tightly-covered container combine to destroy bacteria and make the slow cooker a safe process for making foods. This is a much safer than cooking foods for extended periods at a very low temperature in a conventional oven

Since the slow cooker may take several hours to reach a safe bacteria-killing temperature, keep perishable ingredients refrigerated right up until preparation time. This keeps bacteria from getting a "head start." Other tips:

• Always defrost meat or poultry before putting it into a slow cooker.

• If you cut up meat and vegetables in advance, store them separately in the refrigerator.

• Keep the lid in place, removing only to stir the food or check for doneness.

Here are a couple of frequently asked questions for using a slow cooker, with Wells providing the answers:

1. What kinds of recipes work well in a slow cooker? Answer: Prepare foods with a high moisture content such as chili, soup, stew or spaghetti sauce. If using a commercially frozen slow-cooker meal, prepare according to manufacturer's instructions. Fill the cooker to between half full and two-thirds full.

2. I placed my meat in the slow cooker and then forgot to turn it on. It was off for 6 hours before I discovered it. If I cook it, will that destroy any bacteria and make it safe? Answer: Unfortunately, the meat is not safe, even if you cook it. Perishable food left in the "Danger Zone" (between 40 degrees F and 140 degrees F) for more than 2 hours should be discarded even though it may look and smell good.

3. Is it safe to reheat food like pork barbecue in a slow cooker? Answer: It is not recommended to reheat food or leftovers in a slow cooker. Instead, reheat cooked food to steaming on the stove top or in a microwave oven. Then, you can put it into a preheated slow cooker to keep it hot for serving. Use a food thermometer to be sure the food stays at 140 degrees F or above.

Here is the original pot roast recipe from Rival.

5 or 6 medium potatoes, peeled and cut into even-sized chunks

5 or 6 carrots, peeled and cut into even-sized chunks (now I use a pound of baby carrots and just dump them in)

Layer vegetables in the bottom of the slow cooker, starting with the potatoes, then the carrots and onions. Place the beef on top and salt and pepper. Put the lid on the slow cooker and cook on LOW for 8 to 10 hours, or on HIGH for 5 to 6 hours.

Notes: Slow cooker liners are a newer invention and make clean-up a breeze. You can also add a packet of onion soup mix, sprinkled over the roast, to add a little extra flavor.

This is the newest addition to my Crock-Pot recipe inventory. A coworker and her roommate were planning on having guests over for dinner (pre-COVID, of course), but the coworker got sick and the party got canceled. They were kind enough to share the food, including a big pot of this soup, with the office staff. I enjoyed it so much, they insisted I take home the leftovers. I didn't say no.

This is absolutely the easiest recipe ever! But a word of advice: I'm a big fan of bread bowls and thought this one would be good served that way. Unfortunately, it's not. The soup is pretty thick to begin with and the bread bowl soaked up what little broth there was. Save the bread bowls for something else.

Salt and pepper, to taste

Note: I like tomatoes so I always add an extra can or two. This can be made into a vegetarian dish using vegetable broth and omitting the cooked chicken.

Dump all ingredients into a 5- or 6-quart slow cooker. Cook on LOW for 4 to 6 hours, stirring a couple of times while cooking to incorporate the cream cheese.

If you have leftovers and it gets too thick, add a little more broth when reheating. It does freeze well.

Here are a couple of other soup recipes designed for the slow cooker.

Salt and pepper (optional, to taste)

Place meat in slow cooker. Mix flour, salt and pepper in a medium bowl, and pour over meat; stir to coat. Add remaining ingredients and stir to mix.

In a medium skillet, cook the ground beef until browned over medium heat. Drain thoroughly.

Mix to blend, and cook on LOW setting for 8 hours.