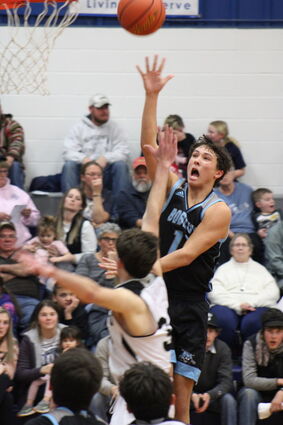 Banking on it • Mason Hoke soars above a Boyd County defender and sends the ball to the bucket in Friday's 46-33 win at Spencer.

After trailing by one at the end of the first quarter, Summerland exploded in the second and third stanzas to pick up a 46-33 road win, Friday, against Boyd County.

Boyd County led 8-7 at the end of eight minutes, but the Bobcats roared back with 18 points to take a 25-16 lead to the locker room.

Summerland hit a dozen points in the third quarter and added nine in the fourth to secure the win.

The Bobcats hit 38% from the two-point range and were three of eight from beyond the arc.

Summerland was slated to play...