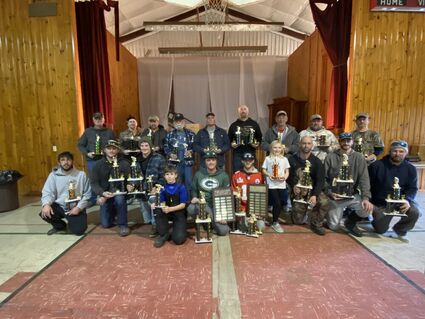 Royal Fire Chief Gary Ober said it's "great" to have a large number of teams participate and be back on the ice.

Now in its 39th year, Ober said the tournament hasn't been held nine times, either due to weather conditions or, more recently, the COVID-19 pandemic.

The event brought anglers from ages six to 78, to the family-friendly affair.

Royal's mayor, Max Hieter, received the trophy for being the oldest fisherman.

Traditionally, the event begins the Saturday evening prior to meeting at the fishing hole. Participants gather at the Royal Gymnasium for a dinner and calcutta.

Following Sunday's tournament, participants return to the gym, with each team's catches weighed and recorded.

Spencer Strope, of Orchard and Tanner Hart, of Clearwater, caught 18.67 pounds of fish and claimed the top trophy. 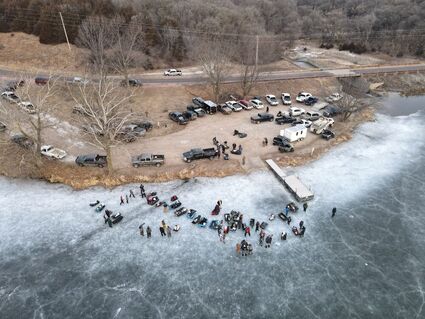 On thick ice • Forty-one teams set out on Grove Lake on Sunday, in search of the perfect ice fishing spot. The Royal Volunteer Fire Department hosted its 39th annual tournament. Fishing began at 9 a.m. and at 2 p.m., anglers exited the ice and headed to the Royal gymnasium to weigh in catches of the day.

Anglers could also enter their catches in a contest for the largest fish in one of five species categories.

Not only is Max Hieter the mayor of Royal and a member of the Royal Volunteer Fire Department, he also rules over the 2022 fishing tournament as the oldest participant.

Hieter, 78, has plenty of fishing experience.

He has competed in all but one of the 39 tournaments. The idea to start a local fishing derby came after he and other Royal residents fished in an ice fishing contest “up west.”

“I think there were 17 teams,” Hieter said. “It’s continued to grow from there.”

Through the years, he’s seen the event change. A few women have cast lines, in hopes of catching a big one. And now, more youth participate.

He hopes more teams venture to Royal for next year’s tournament.

“This year, it’s down a little bit because we haven’t had it for two years because ice wasn’t good enough, so maybe next year we’ll get to do it again.”

Some years, Hieter said temperatures have been “extremely cold.” Sunday’s weather, with a high hovering at 50 degrees, was just right.

“You just have to go out there and dig holes. I’ve fished that lake ever since I was little,” he said.