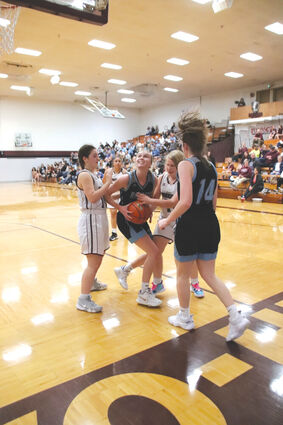 The eyes have it • Hadley Cheatum focuses on the basket, while a Warrior defender tries to disrupt the play.

The Lady Bobcats jumped out to a 15-4 first-quarter lead and never looked back in the Dec. 2 season opener, as they dominated Neligh-Oakdale, 54-18.

Summerland poured on the points in the second quarter, extending the margin to 34-7 by halftime.

The Bobcats continued to add double digits to the score in the third quarter, outscoring the Warrios 16-6.

A running clock went into effect at the beginning of the final quarter, as the Bobcats added another five points.

"We look forward to three big games this week against Riverside, Nio...