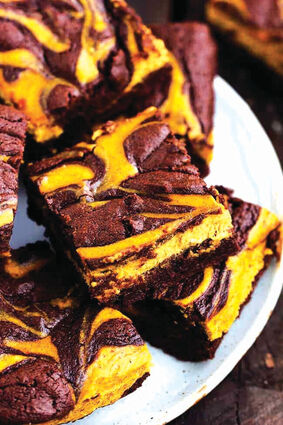 It's no secret I'm not a big fan of pumpkin pie. Especially pumpkin pie topped with whipped cream.

I know for some folks confessing I don't like pumpkin pie is practically criminal, but it is what it is.

It's not that I hate pumpkin pie, it's just not my first choice. If I have one piece a year (hold the whipped cream, please), I'm good. When it comes to holiday desserts, there are other choices for me.

And I don't dislike pumpkin in general (but don't get me started on pumpkin spice!). Several years ago I made a pumpkin roll cake that was really good. I wanted to share that recipe here, but couldn't find it. Maybe next year.

I just think we all need to look at other options when planning your holiday menus. Following are two recipes featuring two popular fall fruits: Pears and apples. Two others include the classic pumpkin flavors: first up are Pumpkin Cream Cheese Brownies, followed by a Poppy Seed and Pumpkin Marble Cake.

First up is a Pear Tarte Tatin. The tarte Tatin is named after the Tatin sisters who invented it and served it in their Paris hotel as a signature dish. It is a pastry in which the fruit is caramelized in butter and sugar before the tart is baked.

It's great for Thanksgiving or any fall celebration.

Whipped cream or creme fraiche (or both whipped together)

Pile the pears into a 10-inch Pyrex pie plate.

Roll out the pastry and trim to a 12-inch circle. Cover the pears with the pastry, tucking it around the edges and down into the dish.

Slide tart onto the center rack of a 425-degree oven. Bake until the pears bubble and the pastry turns a deep, golden brown, 35 to 40 minutes.

Pull tart out of the oven and set a flat serving platter top-side down on top of the pie plate. Pull on mitts. Holding plate and platter together, invert the pair. Rap the pie plate with a wooden spoon to release any stubborn pears. Lift pie plate, leaving tart sitting pretty.

Enjoy warm or at room temperature, with the cream.

Pie Pastry: Measure into the food processor 1 cup flour, 7 tablespoons unsalted butter (cut up) and 1/8 teaspoon salt. Process to coarse crumbs, about 10 seconds. Measure in 3 tablespoons ice-cold water. Pulse about 6 times until clumps are damp. Pat pastry into a disk. If sticky, dust with a little additional flour. Wrap in waxed paper, and chill at least 1 hour.

Preheat oven to 325 degrees F. In large bowl, cream together sugar and butter. Beat in egg. Sift together dry ingredients and add to batter. Add apples and nuts, then stir in hot water.

Grease a 9-inch pie plate. Pour batter into prepared pie plate. Bake in center of oven for 45 minutes at 325 degrees or until a toothpick inserted near middle comes out clean. Serve warm with whipped cream or rum sauce.

This recipe is from cookbook author Katie Workman who says, "I decided to take my favorite brownie recipe, the one I published ... a handful of years ago, and turn it into something that says, 'Hi, pumpkin season, how've you been?'"

The bottom layer is a fudgy brownie, dense and with a serious hit of chocolate, she says. The top layer is a creamy pumpkin cheesecake, scented with those great fall spices. Then a bit of the brownie mixture (which you will reserve) is dolloped on top and swirled into the cheesecake mixture for a beautiful, brown and pale orange marbled effect. These are thick, rich and the kind of dessert where you're going to end up feeling pretty pleased with yourself. It's a dessert to impress, with no fancy baking techniques required.

For the pumpkin cheesecake:

Make the brownie batter: Melt together the butter and chocolate in a medium-sized pot over low heat, stirring until smooth. Remove from the heat and stir in the cocoa powder, sugar and salt, then blend in the vanilla. Beat in the eggs one at a time, stirring quickly so they don't have a chance to cook at all before they are blended in. Blend in the flour.

Scrape about 3/4 of the thick batter into the prepared pan and smooth the top with a spatula. Set the pan and the remaining brownie batter (about one cup) aside.

Make the pumpkin cheesecake batter: In a large bowl, beat the cream cheese and sugar with an electric mixer until smooth. Add the cinnamon, ginger, salt and cloves and beat, scraping down the sides, until well combined. Beat in the eggs, one at a time, and then beat in the pumpkin, cream and vanilla until smooth.

Bake for about 40 to 45 minutes, until a toothpick inserted into the middle of the brownies comes out clean.

Allow the brownies to cool completely in the pan set on a wire rack. Cut into 24 squares.

This marble cake swirls orange pumpkin or squash with gray-flecked poppy seed batter and white vanilla buttercream for a pretty alternative to end the meal.

For a festive touch, use a leaf stencil to decorate the top with a sprinkling of poppy seeds. (Cream cheese frosting would be nice, too.)

Preheat oven to 325 degrees F. Grease and line the bottom and sides of a 6-inch square cake pan or an 8 1/2-by-4 1/2-inch loaf pan with wax paper. Grease the paper with butter.

Put the 1 cup butter, the sugar and vanilla in a large bowl and beat with a wooden spoon or electric hand mixer until pale and creamy. Gradually beat in the eggs a little at a time, adding a spoonful of the flour if mixture starts to curdle. Add the flour and fold in gently, using a large metal spoon.

Divide mixture evenly between two bowls. Stir pumpkin or squash and ginger into one bowl, with a bit of orange food coloring, and stir the 3 tablespoons poppy seeds and the milk into the other bowl. Blend thoroughly but do not overmix.

Repeat layering, always spooning one color on top of the other color. Run a knife through the two flavors to lightly marble them together.

Bake in preheated oven 1 hour 20 minutes or until firm to the touch and a skewer inserted into the center comes out clean. Transfer to a cooling rack to cool before removing the lining paper.

When cake is cool, make vanilla buttercream: Beat butter, sugar and vanilla together in a large bowl with a wooden spoon or electric hand mixer until smooth. Add water and beat again until pale and creamy.

Place the cake on a plate and use a spatula to spread frosting over the top and sides in an even layer. Sprinkle the top with extra poppy seeds in a design of your choice.