These 'soupy taters' are from Sparks, not the South 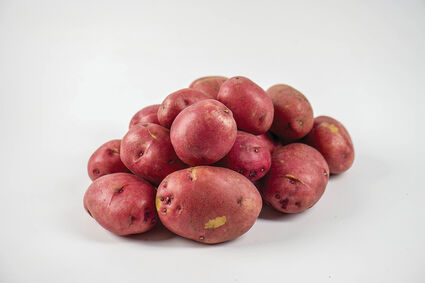 Start with russet potatoes to make a batch of "soupy taters."

One of my family's favorite "comfort food" recipes most likely won't be in any of your cookbooks. For what it's worth, it isn't in any of mine either.

It's a dish affectionately called "soupy taters," and my grandmother was making it more than an hundred years ago on her farm along the Niobrara River near Sparks, east of Valentine.

It's pretty simple: Bacon or stew beef (I've made it with both), potatoes (duh), green beans, chopped onion, beef broth and salt and pepper. That's pretty much it.

I just made a huge batch a couple of weeks ago. I started with a pound of stew beef, cooked in a stock pot with water for just about an hour. I skimmed off the "foamy stuff," and added almost 8 pounds of peeled russet potatoes cut into quarters, three or four cans of beef broth, three or four cans of green beans (drained), chopped yellow onion (start with a whole onion, but save a little bit - more about that in a minute), a bit of beef bouillon for a little extra flavor and some salt and pepper. Cook until the potatoes are tender and it's done.

In our family, we always dip the soup into a bowl, then mash the potatoes with a fork. Not too "mashed," leave them a bit chunky. Then mix in a bit of chopped raw onion you've saved. Salt and pepper to taste. Now you're done. And you have "soupy taters."

Who knows where the recipe originated, but my mom remembered her mom making it a lot. Grandma always made it with bacon. Granddad raised hogs and pork was a menu staple in their house. The potatoes, onions and green beans were from Grandma's garden. The green beans were home-canned, the potatoes and onions stored in the "root cellar" every fall. Most likely it was one of those dishes like vegetable stew or ham and beans that she put on the back of the stove to cook while doing laundry or other chores. The ingredients were something she always had on hand.

I do have to "fess up" that my dad wasn't as fond of it as mom and I were. First, he considered it beef stew with "half the ingredients missing." Mom and I thought he was missing the point: it wasn't beef stew, it was "soupy taters." And they are two very different things. And then he thought mashing up the potatoes in the soup was a silly thing to do. And he totally didn't get added the chopped fresh onion when you already had onions cooked in the soup. Whatever. Really, it's all about the texture.

If you're looking, there are recipes for "soupy taters" online, apparently they are a staple in southern cooking. But looking at those recipes, they are more like creamy potato soup, which this recipe is most definitely not. Some recipes call them "stewed potatoes."

This is the closest thing I can come up with for a recipe.

Put the stew beef or bacon in a large stock pot (at least 8-quart) and add enough water to cover. Cook over high heat until done, checking often to make sure there it doesn't boil dry. Skim the foam off the top.

Meanwhile, peel the potatoes and cut into quarters. Chop the onion.

When the beef/bacon is cooked, add the beef broth, potatoes, drained green beans and most of the chopped onion. Add a couple of tablespoons of the beef bouillon to the mixture and stir well. Cook until the potatoes are done. Add more green beans or broth if needed.

Dip into bowls and mash up the potatoes a bit with a fork. Sprinkle a few pieces of the chopped raw onion into the soup, salt and pepper to taste.

Note: When I made this in an 8-quart stock pot, I couldn't get all the potatoes to fit. It seems like I always run out of potatoes when there is plenty of soup left, so I cooked the extra potatoes separately and added them into the soup after we'd had it for a couple of meals.

Also, this does not freeze well. The potatoes get mushy and the texture is just off.

Curious about southern "soupy taters"? Here is a recipe from MamaPeggy.com:

Served with cornbread and black-eyed peas, "soupy taters" - also known as stewed potatoes - were a real treat from any proper old Southerner's childhood.

Peel and cube the potatoes, put in a medium pot and fill with water until it's about 2 inches above potatoes.

Bring to a boil (you want the potatoes cooked to they are just fork tender, not falling apart.

After the potatoes are done, keep them in the same water you cooked them in and reduce to a low heat.

Put the flour and half cup of water in a bowl and blend with a whisk until the flour is dissolved.

Stirring constantly, but carefully, add the dissolved flour and water into the pot with the potatoes and water. Allow a few minutes to cook on simmer so that it can thicken.

Add milk, salt, pepper, onion flakes and butter or bacon grease (if desired - it's fine without the bacon grease). Season to taste.

Using a large saucepan, melt the butter or margarine over moderately low heat. Add the celery and cook - stirring occasionally - until celery begins to soften, about 10 minutes.

Stir in the potatoes, 2 cups of the corn and the broth. Bring to a boil. Reduce the heat; simmer - stirring occasionally - for about 15 minutes.

Using a blender, puree the remaining 2 cups of corn with the milk. Stir the puree and the black pepper into the chowder. Simmer until the soup thickens slightly, 5 to 15 minutes. Taste and add salt as desired.