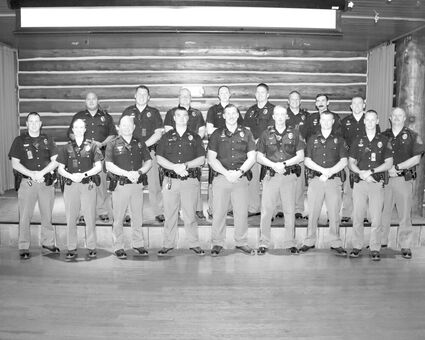 Honored • Twenty-seven Nebraska State Patrol troopers are recognized for their efforts to keep impaired drivers off the roads. Mothers Against Drunk Driving presented the awards, Sept. 22, in Lincoln.

More than 25 Nebraska state troopers, including two based in Neligh, have been honored for their efforts to remove impaired drivers from the road, as well as educate the public about the dangers of drunk driving.

Twenty-seven troopers were presented Hero Awards by Mothers Against Drunk Driving during a Sept. 22 ceremony at Wilderness Ridge in Lincoln. MADD honors law enforcement across the state for their daily work to keep drunk or drugged drivers off Nebraska roadways.

Troopers Ray Johnson and Tyler Mann, from Neligh, were two of the dozen Troop B employees recognized.