It's BLT season and I couldn't be happier 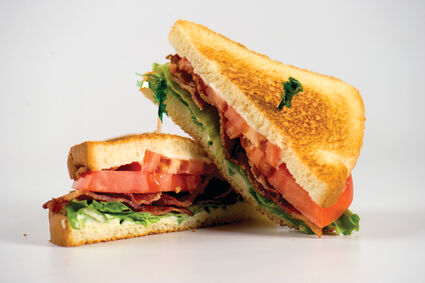 It's BLT season and I couldn't be happier

Friday, June 18, was marked on my calendar for weeks.

I was literally counting down the days. The anticipation grew.

So what important event was happening on the day? Not a birthday. Not an anniversary. Not the day I would inherit a lot of money.

It was the day my favorite area produce stand opened for the summer. And that means it's BLT season. Because we all know that tomatoes are the most important ingredient in BLTs. Bacon, lettuce, mayo and bread don't vary from season to season. But tomatoes do and the ones fresh from the garden are the best.

That produce stand is open in a nearby town just once a week and I've been there every Friday since June 18. The tomatoes the first week were good, but were typical of early season produce. The second week they were awesome, with the perfect summer tomato flavor. The third week as a little disappointing but that was right after storms had moved through the area and hail damaged some of the crops. There weren't as many to choose from and the ones there were a little riper than I prefer. But last week they were back to being awesome.

My friends kid me about my love of BLTs. And yes, I admit this time of year, I might eat them four, five or even six times a week. The season is short and you have to make the most of it.

My BLTs aren't fancy. No heirloom tomatoes or artisan breads. No fancy flavored mayos or greens. No specialty bacon.

No, my BLTs start with Hormel Black Label thick-sliced bacon, basic white sandwich bread (the store brand is just fine), Miracle Whip and iceberg lettuce. And of course, my favorite fresh tomatoes. And I have a precise way of putting those favorite summer treats together.

First the tomatoes. I try to buy the biggest ones they have. Ones that when sliced, will fill the entire piece of bread. Since the stand is only open around here once a week, I try to pick out tomatoes in varying stages of ripeness, so I can spread out my BLT love for the entire week.

When I slice the tomatoes, I slice them thin, perhaps a quarter inch thick. I prefer two thin slices per sandwich rather than one thick one. If the tomato is big enough, one tomato will yield three sandwiches.

Once the tomato is sliced, I spread the slices on a paper towel and salt them. That helps bring out the flavor while you're preparing the rest of the ingredients.

For convenience I cook my bacon in the microwave, but many swear by the oven method for bacon. If you want to try it, here's how food writer Rick Nelson of the Minneapolis Star Tribune says to do it: Preheat the oven to 350 degrees F, line a rimmed baking sheet in aluminum foil and arrange the bacon slices in a single layer. Roast until the bacon is browned and crisp, about 8 to 12 minutes, rotating the pan from front to back halfway through baking; the timing will depend upon the oven's eccentricities and the bacon's thickness. Remove the pan from the oven and, using tongs, transfer the bacon to a paper towel-lined plate.

For two sandwiches, I use three slices of bacon and cut them in half before I cook them. Each sandwich gets three strips. The bacon needs to be crisp, but not too crisp. It needs a little "give."

While the bacon is cooking, I toast my white sandwich bread. Again, the amount of "doneness" matters. I prefer mine lightly toasted, again so it has a little "give." But I want it more toast than bread. I've learned the best settings on my toaster: level 3 for the first batch, then lowered to level 2 for the second. Leave it on 3 and the second batch gets too brown.

I don't cut them in half to eat them, but you can if you want. I do suggest wrapping the bottom half with a paper towel to catch the drips because if the tomatoes are juicy enough they can get messy.

And there's nothing wrong with messy.

While I like my stick-to-the-basics BLTs, there’s nothing wrong with branching out a bit. Here a few recipes to try.

Food writer Daniel Neman offered his take on the BLT: an LBGT.

“That is to say a lettuce, guacamole, bacon and tomato sandwich — it’s just a BLT with guacamole and a trendy name,” he said. “What difference could a little guacamole make? Quite a lot, actually. It entirely changes the sandwich’s complexion, providing a cooling counterpoint to the bacon’s smoky salt. The guacamole also adds more of the creaminess that is typically provided by mayonnaise, only it brings with it that wonderfully rich taste of avocados, the faint bite of red onions and just a hint of garlic.

“It’s that garlic that is the secret to my guacamole, by the way. Usually when you use raw garlic, no matter how finely you mince it you still run the risk of swallowing an overpowering mouthful of garlic. But I was at a great Mexican restaurant in New York many years ago that eliminated that problem by putting garlic powder in their guacamole. I’ve been using garlic powder ever since.”

Cook bacon until crispy. Drain on paper towels and set aside.

Peel and seed avocado. Mash in a small bowl until as smooth or chunky as you want. Stir in onion, tomatoes, garlic powder and lime juice, and season to taste with salt and pepper; add more garlic powder if desired.

Spread mayonnaise on toast. Layer with lettuce, tomatoes, guacamole and bacon, and top with other slice of toast.

If you’re looking for a different spin on BLT, hold the mayo and think sweet and crunchy, says Susan Selasky, food write for the Detroit Free Press.

“This BLT gets a crunch from juicy crisp apple slices,” she said. “And the juicy slice of tomato on a BLT pairs well with the apples. All the ingredients in this BLT are paired with a sour cream sauce sweetened with cider instead of mayonnaise. The cider aioli is made by boiling down fresh cider to almost a syrup consistency.”

Once reduced, the syrup is mixed with tangy sour cream. Use regular or reduced-fat sour cream or creme fraiche. Cover and let stand at room temperature for at least 8 hours or overnight until the mixture is very thick. Refrigerate it, covered, up to a week.

To make the cider aioli: In a medium saucepan over high heat, bring the cider to a boil. Reduce until it reaches a syrupy stage, about 15 to 20 minutes. You should have about 1/4 cup or so. Let cool.

In a bowl, whisk the cider reduction with the sour cream. Set aside until ready to use.

To make the sandwiches: Spread 1 tablespoon of the cider aioli over each slice of bread. Layer the sandwiches, starting with one leaf of lettuce, then 2 strips of bacon, apple slices and a tomato slice. Top with another leaf of lettuce if desired. Top with the remaining toast slice, cut in half diagonally and serve.

Recipe adapted from: “The Comfort of Apples” by Philip & Lauren Rubin (Lyons Press, $19.95)

Here’s another take from Selasky.

Salt and pepper to taste

Have ready a panini maker, George Foreman-type grill or a skillet.

For each sandwich, butter one side of each slice of bread. Build your sandwich starting out with one slice of the bread, butter side down. Place a layer of salad greens; red onion slices, if using; tomato slices; 2 slices cooked bacon; 2 slices mozzarella and several slices of avocado. Sprinkle the avocado with salt and pepper to taste and 1 tablespoon cilantro leaves. Top with another slice of bread, butter side up.

Place in the panini maker or grill and follow manufacturer’s instruction for cooking. Or place in the skillet and cook until golden brown on one side, turn over and cook on the other side.

Serve these sandwiches immediately or wrap and refrigerate until ready to serve or pack for traveling.

And to go in a completely different direction, check out this Chilled BLT Soup from chef Sara Moulton, who was executive chef at Gourmet magazine for nearly 25 years, and spent a decade hosting several Food Network shows.

“Chilled BLT Soup puts the ‘T’ in BLT,” she said. “Yes, there’s bacon and lettuce, and some toast, too, in the form of croutons. But the star of this show is the tomato in its season.

How do you know whether you’re buying a good tomato? Moulton offers this advice: To start, pick it up. It should feel heavy, which lets you know it’s ripe and juicy. Then take a whiff of the stem end. It should smell strongly like ... a tomato. Once you get it home, store it on the counter, out of the sun. If it’s not fully red, just leave it alone. It will continue to ripen at room temperature. Don’t put a whole uncut tomato in the refrigerator. Chilling it will kill the flavor and the texture.

You want to salt your tomatoes ahead of time, before you cook them, a step that helps to concentrate their flavor. First salt the large tomatoes, which form the base of the soup. Then salt the quartered tomatoes, which provide crunch.

The tomatoes in this recipe don’t need to be seeded or peeled. That’s because you’re going to puree them in a blender until smooth. (Use a blender, not a food processor, which doesn’t produce a smooth texture.) Also, if you seed the tomatoes, you lose a lot of the jelly surrounding the seeds — and that jelly is where the tomato essence lives.

On the chance that you’ve somehow underrated tomatoes before, this deeply flavorful and refreshing soup will show you what you’ve been missing.

Core and cut the large tomatoes into 1/2-inch thick wedges. In a large bowl toss the wedges with 1 teaspoon salt and set them aside for 1 hour.

Meanwhile, on a large rimmed sheet pan toss the bread cubes with 1 tablespoon olive oil until they are well coated. Sprinkle them very lightly with salt and toss again. Bake on the middle shelf of the oven until they are golden, 6 to 8 minutes. Set them aside to cool.

In a medium saucepan over medium heat, cook the bacon until it is crisp, about 5 minutes. Transfer to paper towels to drain. When the bacon is cool, crumble it and set it aside.

In a strainer set over a bowl toss the cherry tomatoes with 1/2 teaspoon salt and let them drain for 15 minutes.

In a small bowl combine the mayonnaise with the garlic, the lemon juice and 1 tablespoon of the tomato juice from the drained cherry tomatoes and stir well.

Working in batches, transfer the tomato wedges and their liquid to a blender and blend until very smooth. Transfer to a bowl, stir in the remaining 2 tablespoons olive oil, the sherry vinegar, and salt and pepper to taste. Add the cherry tomatoes and chill the soup until it is cold.

To serve: Spoon one-fourth of the soup into each of the four soup bowls. Drizzle each portion with some of the mayonnaise and top with the bacon, the romaine and the croutons.