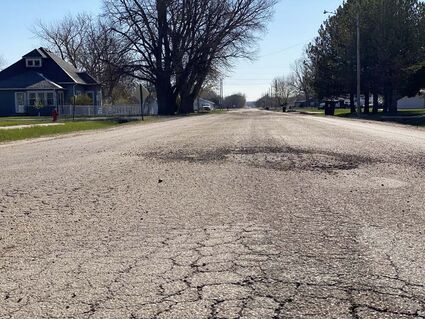 End of the line • Clearwater Village Trustees approved hiring Knife River Midwest to hot mix patch portions of Nebraska Street (above), in addition to the entrance to the village's Main Street. The project will cost approximately $80,000 and will be completed by early May.

Two stretches of roadway in Clearwater will receive a much-needed update.

During an April 12 meeting, Clearwater Village Board of Trustees approved hot mix patching on a two-block stretch of Nebraska Street, starting at the intersection near the Clearwater Public Library and moving east. Also included will be a stretch of road, beginning at the intersection of First and Main streets and extending north to U.S. Highway 275.

Knife River Midwest will complete the project, which will total $80,409.38.

Work was expected to begin April 19 and be completed by May 5.

Trustees discussed how deep to...