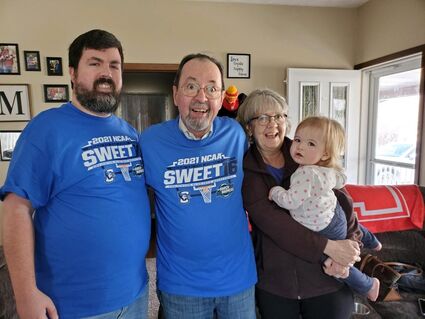 Mark, Tim, Judy and Hazel Mahoney are ready for Creighton men's basketball. The Bluejays played in the sweet 16 of the 2021 NCAA tournament on Sunday.

I'm feeling a bit blue this week about the state of NCAA Division I men's college basketball in Nebraska.

The fifth-seeded Creighton Bluejays lost, 83-65, to the top-seeded Gonzaga Bulldogs on Sunday in the sweet 16 of the 2021 NCAA tournament.

That means the Bulldogs march on in the national championship competition while the Bluejays fly home, disappointed, from Indiana.

Creighton was the only team from the state of Nebraska in the men's NCAA tournament this year – as the Bluejays usually are.

Neither the Nebraska Cornhuskers nor the Omaha Mavericks qualified for the 68-team competition...