At-home cooking for the Lenten season 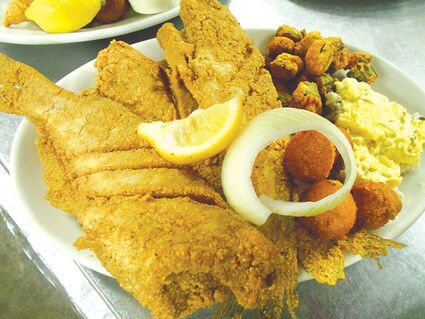 Like most people, I'm guessing, I know that Catholics don't eat meat on Fridays during Lent. (For the record, I'm Methodist.)

And like most people, I'm also guessing, I never really stopped to think about why they don't. And why is fish OK?

So, doing like most people do these days when looking for an answer to "why," I turned to our good friend Google.

This is what I found on the website for the Archdiocese of St. Paul and Minneapolis at http://www.archspm.org:

"Catholics abstain from flesh meat on Ash Wednesday, Good Friday and the Fridays of Lent.

"Abstinence is one of our oldest Christian traditions. 'From the first century, the day of the crucifixion has been traditionally observed as a day of abstaining from flesh meat (black fast) to honor Christ who sacrificed his flesh on a Friday.' (Klein, P., Catholic Source Book, 78)

"Up until 1966, Church law prohibited meat on all Fridays throughout the entire year. The new law was promulgated in 1983 in the revised Code of Canon Law which states, 'Abstinence [is] to be observed on Ash Wednesday and on the Friday of the Passion and Death of our Lord Jesus Christ.' (Canon 1251) 'All persons who have completed their 14th year are bound by the law of abstinence.' (Canon 1252) The U.S. Catholic Conference of Bishops extended this law to include all Fridays in Lent.

"Since Jesus sacrificed his flesh for us on Good Friday, we refrain from eating flesh meat in his honor on Fridays. Flesh meat includes the meat of mammals and poultry, and the main foods that come under this heading are beef and pork, chicken and turkey. While flesh is prohibited, the non-flesh products of these animals are not, things like milk, cheese, butter and eggs.

"Fish do not belong to the flesh meat category. The Latin word for meat - caro - from which we get English words like carnivore and carnivorous, applies strictly to flesh meat and has never been understood to include fish. Furthermore, in former times flesh meat was more expensive, eaten only occasionally, and associated with feasting and rejoicing; whereas fish was cheap, eaten more often, and not associated with celebrations."

And now I know the "why." I did know that when I a young child, Catholics couldn't eat meat on Fridays all year long. Our school lunch menus reflected that: Macaroni and fish sticks one week, tuna or peanut butter sandwiches the next. To this day, I still associate mac and cheese with fish sticks; a friend and I were just talking about that the other day. (We also noted that our parents often served hot dogs with mac and cheese and decided that must have been a generational thing. But I digress.)

I also know that at some point, meatless Fridays went from every week to just the Fridays during Lent. But I didn't know the details. Now I do.

I have to admit, that in general, I'm not a big fan of fish or seafood. But I do like freshwater fish, when it's cooked right. In the spirit of Lent, here are a couple of recipes for the season.

Pour the milk into a bowl and let the catfish soak in it while you heat about 1-1/2 inches of oil in a large pan to about 375 degrees. Mix the panko or cornmeal in a plastic bag with the peppers and salt.

Drain the fillets; then shake them in the panko in the bag. Shake off any excess coating and fry them until golden brown on both sides, a total of about 5 minutes. Drain on paper towels and serve immediately with lemon wedges.

Does anyone make salmon patties anymore? I remember my mom cooking them, but I've never made them myself. So when I stumbled across this recipe, I decided I'll have to give them a try.

If you like extra-crispy salmon patties, you can dredge them in additional bread crumbs for more crunch.

Flake the salmon to desired consistency. Add the eggs, shallot, bread crumbs, salt and pepper. Cut lemon in half; add juice from one half to the salmon. Reserve remaining lemon half for serving, if desired. Toss to mix well. Divide the salmon mixture into four equal portions and shape lightly into patties. (For crunchy salmon patties, dredge each patty in additional bread crumbs, if desired.)

Heat the oil in a nonstick skillet over medium. Add the patties and brown each side about 4 minutes or until done to personal preference. Be sure to cook the patties at least 6 minutes to make sure egg is cooked through. Drain on paper towels and serve immediately with additional lemon.

If you like your salmon with a little lessing breading, check out this quick recipe that pairs sesame-crusted fish with steamed and sauced bok choy, a Chinese leafy cabbage. For less kick, omit the chile peppers.

Preheat oven to 200 degrees. Place sesame seed on baking sheet. Season salmon with salt and pepper and press both sides into sesame seeds to coat evenly.

In small bowl, combine soy sauce, lime juice and honey. Set aside. Heat garlic and ginger in remaining oil in skillet. Add bok choy and chile, if using, and toss to coat. Add 1 tablespoon soy sauce mixture and cover pan with lid. Steam until tender, 2 to 3 minutes. Remove from pan and set aside.