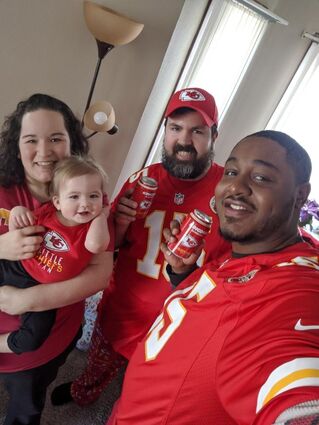 Countdown to kickoff • Christina, Hazel and Mark Mahoney and Ty Rushing are ready to watch the Kansas City Chiefs play the Cleveland Browns in the postseason, Sunday, Jan. 17. The Chiefs defeated the Browns 22-17.

Sometimes it's better to be lucky than good.

That's how I view the Kansas City Chiefs' 22-17 win over the Cleveland Browns on Sunday, that sent my favorite pro football team on to the next round of the playoffs.

Going into the game, I thought the Chiefs were going to win, of course, but not with backup quarterback Chad Henne finishing off the victory.

Patrick Mahomes, Kansas City's starting quarterback, was knocked out of the contest in the third quarter with an injury, which was reportedly a tweaked nerve in his neck.

After Mahomes left the game, I honestly believed the Chiefs were doomed...