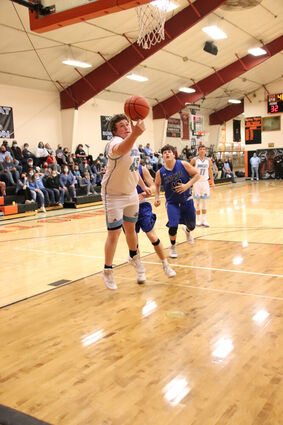 On the edge • Joe Ahlers reaches for a layup against North Central when the teams played Jan. 7, in Ewing. Ahlers scored two points and nabbed two rebounds in the Bobcats' 46-39 victory.

Mason Hoke scored the bulk of the points, leading the team with 13.

The Bobcats were able to start hot in the first quarter, scoring 15 points and taking a four-point advantage into the second quarter. They kept the good offense going with another strong quarter and went into the half, up 28-21, on the Knights.

In second-half play, the boys seemed to struggle against a resolved North Central team that cut the Bobcat lead down by two points to start the fourth quarter.

The Bobcats were able to adjust and...