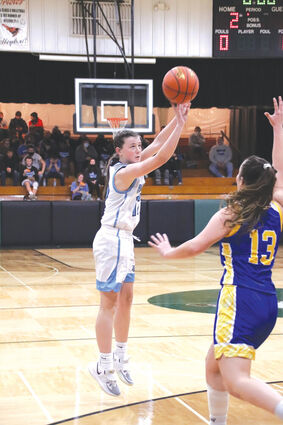 Concentration • Adyson Mlnarik spies the hoop and sends a shot over a West Holt player during a Jan. 8th game in Orchard. Summerland downed the Huskies, 42-31.

The Summerland girls grabbed another win at home, Jan. 8, against the West Holt Huskies, 43-31, in a game that was fairly close until the fourth quarter.

On offense, Summerland was led by Brenna Wagner, who shouldered the scoring load with 23 points and two big threes in the fourth to secure the lead.

The Lady Bobcats started off the game with slow offense through both the first and second quarters, as they went into the half tied 13-13.

The second half showed both teams picking up the offense. The Lady Bobcats doubled their halftime score to take a 26-22 lead into the fourth quarter.