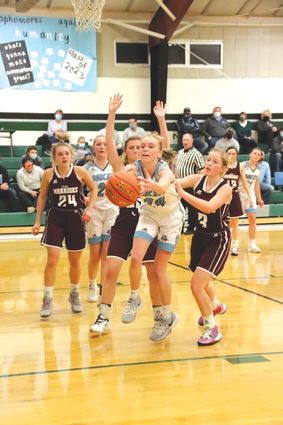 Control • Hadley Cheatum grabs a pass from a teammate as Neligh-Oakdale defenders apply pressure. The Bobcats downed the Lady warriors, 42-29, Thursday, in Clearwater.

The Lady Cats started the season off on the right foot with an exciting 42-29 win against Neligh-Oakdale in the Dec. 3 home opener in Clearwater.

Summerland was led offensively by Brenna Wagner, who poured in 23 points.

Early in the game, fouls and turnovers plagued the Bobcats as they went into the half only up by one.

The third quarter saw more of the same as the game stayed close at 27-25 going into the fourth quarter.

The Bobcats opened up the fourth more relaxed as they jumped out to an early five-point lead before taking over behind senior Kyra Nilson's seven fourth-quarter points...