Give me pumpkin to talk about 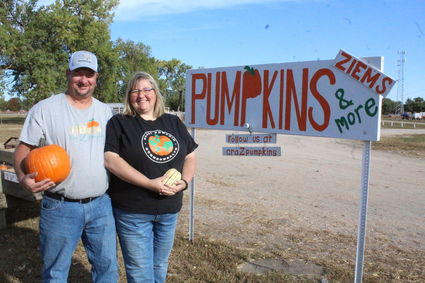 Pumpkins & more • (l-r): Larry and Tamra Jackson-Ziems set up a pumpkin stand near the U.S. Highway 275 and Nebraska 45B junction in Ewing. CraZ Pumpkins offers a variety of pumpkins and gourds for sale.

Larry and Tamra Ziems are crazy about growing pumpkins of all shapes and sizes.

The rural Ewing couple own CraZ Pumpkins, which has seasonal stands in Ewing and Clearwater, with pumpkins and gourds for sale.

"Larry's been growing a few pumpkins for several years," Tamra said. "Then when I moved up here after we were married in 2012, we had a couple really good years and we had a few extras. And I said, 'It was sad we couldn't share these with more people.'"

That led Larry and Tamra to put up a stand in 2017, for the first time in Ewing. They added the Clearwater location this year.