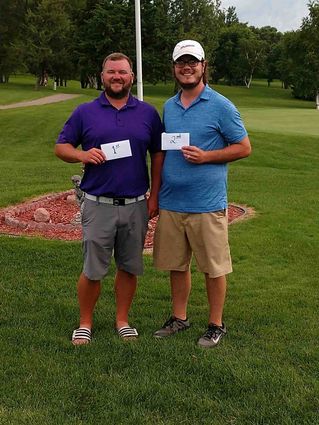 Club champs • (l-r): Craig Flenniken and Doug Erb are named champion and runner-up, respectively, of the Summerland Men's Open. The tournament, sponsored by the Bank of Orchard, was held Sunday.

Craig Fleniken shot 70 in the qualifying round, leading a group of 10 competitors into the finals of the Summerland Men's Open, played July 26, at Summerland Golf Course.

In the final round of nine, Flenniken carded 33, to finish with 103 to claim the crown.

Doub Erb ended as runner-up, finishing with an overall score of 111.

Erb edged out Mitch Todd, who finished with 112.