Get ready to barbecue for Father's Day 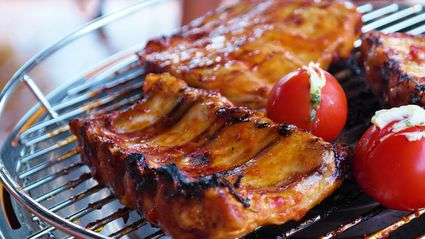 When you hear the word "barbecue," what's the first thing you think of?

Throwing a couple of steaks or burgers on the grill and inviting the family over for a Father's Day cook-out (keeping socially distant of course)? That metal thing in your backyard that cooks those steaks or burgers using either gas or charcoal? Or the sauce you find in the grocery store next to the ketchup and mustard?

Well, if your answer is yes to any of those three thoughts, then, well I hate to tell you this, but according to the barbecue purists, you're wrong. Cooking meat on that metal thing is called "grilling" and that metal thing is a "grill." And while that red sauce in the grocery store is barbecue sauce, there is so much more to it.

Unlike grilling, barbecue is a more laborious process: cooking at low temperatures for hours, turning the meat into fall-off-the-bone tastiness. It's been around for centuries and its roots in the United States date back to the colonies in the late 1600s. Barbecue in its current form grew up in the South, where cooks learned to slow-roast tough cuts of meat over fire pits to make them tender.

There are three main ingredients to barbecue: meat and wood smoke are the first two, plus a sauce or seasoning that varies widely across the country.

The first ingredient in the barbecue tradition is the meat. The most widely used meat in barbecue is pork, particularly the pork ribs, and also the pork shoulder for pulled pork. If you prefer beef, brisket is one of the most popular choices.

The second ingredient in barbecue is the wood used to smoke the meat. Different woods impart different flavors, so the regional availability of the various woods for smoking influences the taste of the region's barbecue. Smoking the meat is the key, as otherwise cooking meat over an open flame is simply "grilling" the meat, whereas barbecue is the actual process of "smoking" it.

When it comes to the sauce or seasoning, the United States features four basic regions, with variations in each reason. Carolina and Memphis, which rely on pork and represent the oldest styles, and Kansas City and Texas, which use beef as well as pork, and represent the later evolution of the original Deep South barbecue.

Memphis barbecue is primarily two different dishes: ribs, which come "wet" and "dry," and barbecue sandwiches. Wet ribs are brushed with sauce before and after cooking, and dry ribs are seasoned with a dry rub. Barbecue sandwiches in Memphis are typically pulled pork (that is shredded by hand and not chopped with a blade) served on a simple bun and topped with barbecue sauce, and coleslaw.

Around here, we are probably most familiar with Kansas City barbecue. Kansas City style is characterized by a variety in meat, particularly including beef and pork, and a strong emphasis on the signature ingredient, the sauce.

The meat is smoked with a dry rub, and the sauce served as a table sauce. Kansas City barbecue is rubbed with spices, slow-smoked over a variety of woods and served with a thick tomato-based barbecue sauce, which is an integral part of K.C.-style barbecue.

The final region is Texas but even there, there is no consensus on what makes "barbecue." There are three generally recognized regional styles of barbecue in Texas: East Texas style, which is essentially Southern barbecue and is also found in many urban areas; Central Texas "meat market style," which originated in the butcher shops of German and Czech immigrants; and West Texas "cowboy style," which involves direct cooking over mesquite.

Want to explore regional barbecue? Here are a couple of recipes to get you started.

To prepare this recipe, you also will need about 1 cup wood chips for smoking (available alongside grilling supplies) and heavy-duty foil. Charcoal or gas grills can be used; total grilling time is about 6 hours.

In a large bowl, combine the bourbon, molasses, vinegar, water, chipotles, 2 tablespoons of the salt, red pepper flakes, and 1 tablespoon of the black pepper. Stir well and set aside.

Place the pork shoulder in a large zip-close plastic bag. Pour the marinade over the pork, then seal the bag, pressing out as much air as possible. Refrigerate for 6 to 9 hours.

At least 2 hours before you are ready to cook the pork, place about 1 cup of wood chips in a bowl, then cover with water and let soak for at least 2 hours.

Once the pork has marinated, remove it from the bag and set on a large plate and set aside. Pour the marinade into a medium saucepan, then boil for 12 minutes to use for basting and as a sauce. Set aside.

In a small bowl, combine the remaining salt, paprika, garlic powder, remaining black pepper and cayenne. Stir to mix, then generously sprinkle the spices over all surfaces of the pork. Cover the pork and refrigerate for 1 hour.

Remove the pork from the refrigerator and let come to room temperature while the grill heats.

Prepare a charcoal or gas barbecue or smoker for indirect cooking, placing a water-filled drip pan under the cool side of the grill rack. Preheat to 250 degrees F. Make sure the grill rack is clean and oil it thoroughly with cooking spray.

Place the soaked wood chips on a piece of heavy-duty foil, then fold it over like an envelope to enclose the wood. Using a pencil, poke 3 or 4 holes in the top of the foil envelope (don't poke all the way through).

Place the foil packet directly on the coals or gas flames. When the wood inside the packet starts to smoke, transfer the pork butt to the prepared grill rack over indirect heat.

Lower the lid rack and cook until the internal temperature reaches 190 degrees F to 200 degrees F, about 5 to 6 hours. During the final 2 hours of cooking, baste the pork with some of the reserved sauce every 30 minutes.

Remove the pork from the grill and use 2 large forks to shred and pull apart the meat. Transfer the meat to a large bowl, then stir in 3 to 4 tablespoons of the sauce (or up to 1/2 cup). Serve on hamburger buns with coleslaw on top or on the side.

Recipe from: "The Best Barbecue on Earth," by Rick Browne (Ten Speed Press, 2008)

In Texas, barbecue means brisket, and the sauce is served on the side.

Place oil in a medium saucepan over medium heat. When hot, add onion and garlic, and cook for 3 minutes. Add tomatoes and simmer for 8 minutes. Add the remaining ingredients and bring to a boil. Reduce heat and simmer for 15 minutes. Remove from heat and puree in blender or food processor. Serve immediately or let cool and refrigerate.

Kansas City-style barbecue refers to the specific regional barbecue style of slowly smoked meat that originated from the pit of Henry Perry in the early 20th century in Kansas City, Missouri. If you want to add some wood chips to the charcoal, go ahead.

1 cup classic barbecue sauce (your own or store-bought)

2 racks pork loin ribs, about two pounds each with the membrane removed

Combine marinade ingredients in medium bowl and mix well. Place ribs in a large zipper bag and pour in marinade ensuring ribs are fully covered. Set aside and marinate for 2 hours, or overnight in refrigerator. 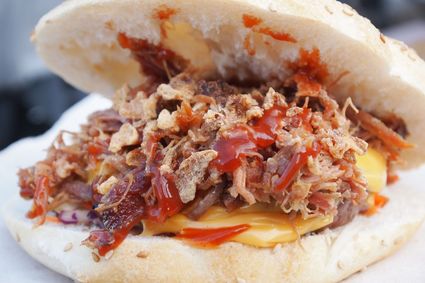 Set up two-zone fire for indirect grilling with charcoal by situating charcoal on only one side of grill, leaving other side void. Heat to 400 degrees F.

Lightly oil grill. Remove ribs from marinade and dispose of excess liquid. Place ribs, bone side down, over direct heat and cover grill for 6 to 8 minutes. Then turn ribs and cover for another 6 to 8 minutes. Continue this process for 45 minutes to an hour or until ribs are tender.

Once tender, move ribs to void side of grill and coat with barbecue sauce. Cover grill for another 6 to 8 minutes.

Remove ribs from grill and cover with butcher paper or aluminum foil. Let rest for 10 to 15 minutes. Slice ribs into individual pieces and serve.