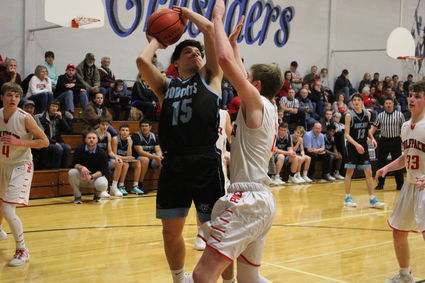 In the zone • Houston Marino attempts a shot in the Bobcats' 48-47 loss to Elgin Public/Pope John. Summerland had an opportunity to win the game, when the teams were tied at 47, but a late foul sent EPPJ to the charity stripe, and one shot secured the win.

A late foul and last-second free throw gave Elgin Public/Pope John a 48-47 win over Summerland, when the teams met in Elgin last Thursday.

EPPJ held a slim lead, 13-9, at the end of the first quarter, but the Bobcats outscored the Wolfpack to take a 26-25 lead into the locker room.

The Wolfpack battled back, holding Summerland to 11 third quarter points. In the final stanza, the score shifted back and forth until it was tied at 47 with 30.4 seconds left.

The Bobcats maintained the ball, until 4.5 seconds remained. As the ball veered toward the out-of-bounds line, Connor Napier dived after i...