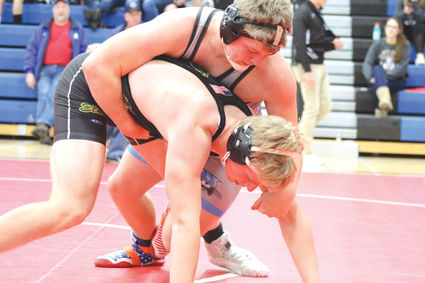 Pin it to win it • Colton Thiele takes down Elkhorn Valley's Gavyn Clause during a second round match in the winner's bracket of the Niobrara Valley Conference duals tournament, Jan. 23, in Niobrara. Thiele pinned Clause in 1:56. The Falcons defeated Summerland, 42-18. The Bobcats finished third overall, behind Neligh-Oakdale and Elkhorn Valley. Complete results on Page 4.

During the first round in the winner's bracket, N-O hung on for a 42-33 win over EV.

Summerland picked up a 39-30 win over North Central.

Double forfeits were recorded in the 106 and 182 classes.