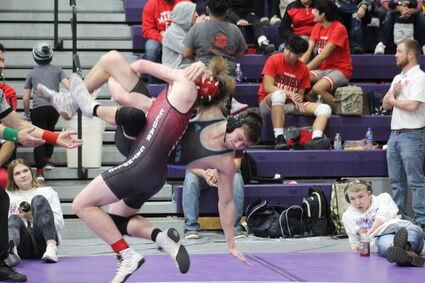 Up in arms • Kendrick Schroeder braces for a landing as Cole Bensen, of Hartington Cedar Catholic, attempts to take down the senior Bobcat wrestler. Bensen pinned Schroeder in 1:31, Saturday, during a match at the Battle Creek Invitational.

Nineteen teams competed and, at the end of the day, the host team secured the team title, surpassing Crofton/Bloomfield by eight points, 184.5 to 176.5.

The Bobcats ended with 42 points and all eight competitors earned medals.

Ethan Kester won bronze in the 126-pound class. He pinned Ponca's Thomas Beavers, in 1:18, and won an 8-4 decision over BC's Jaxon Hassler to advance to the championship bracket. Trev Arlt, Yutan, pinned Kester in 1:09. In the third-place match, Kester won by an 8-0 major decision over...