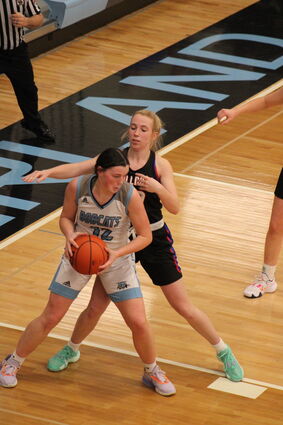 Adyson Mlnarik searches for a way around a H/LHF defender. The Lady Cats defeated the Bulldogs, 53-45, Friday.

Three games, three wins for the Lady Bobcats in contests played between Jan. 9 and 13.

Adyson Mlnarik led Summerland with 24 points. She and Hadley Cheatum each secured four rebounds in front of the home crowd.

On Jan. 10, the Bobcats traveled to Creighton for a non-conference game and returned home with a 69-38 victory.

Mlnarik scored 26 points and Cheatum added 18 for the Bobcats.