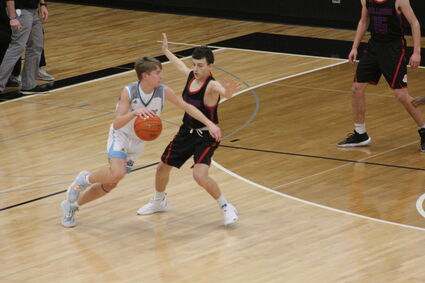 Man to man • Sam Cheatum skirts past an unidentified Humphrey/Lindsay Holy Family defender. The teams battled Friday at Summerland and the Bobcats held on for a 43-42 win.

After a week filled with three games, Summerland boys' basketball team finds itself with one loss on the season.

Creighton eked past the Bobcats, 43-42, after senior Jaykwon Petite was cited for an offensive charge in the final seconds of the game.

On Monday, the Bobcats played a solid game and defeated the visiting Stuart Broncos, 53-44.

On Friday, the Bobcats survived an unfortunate turnover with 6.4 seconds remaining to secure a 43-42 win against Humphrey/Lindsay Holy Family.

Petite led the Cats with 13 points, connecting on five of six shots from the charity stripe and shooting 44% from the 2-point range.

The Bobcats return to action Friday, Jan. 20, whe they travel to Osmond for an 8 p.m. tipoff against Osmond-Randolph.

The junior varsity team will participate in the Niobrara/Verdigre JV tourney, Saturday, in Niobrara.