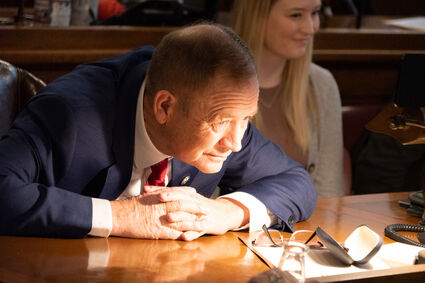 New kid on the block • Sen. Barry DeKay of Niobrara leans into his desk lamp light, while talking with Sen. Joni Albrecht of Thurston in the row ahead of him, on Wednesday, Jan. 4, in Lincoln. DeKay, a farmer and rancher, succeeds Sen. Tim Gragert of Creighton for the northern Nebraska district.

Twenty-six Nebraska senators took their oaths of office, Wednesday, Jan. 4, and selected more than a dozen leaders who will fill out the ranks of the Legislature for the next two years.

The 108th Nebraska Legislature convened for the first day of a 90-day session, which is scheduled to end June 9. Nearly one-third of the senators - 16 - are brand new to the 49-member, officially nonpartisan body, while two senators are returning after previously serving.

One of the first responsibilities for senators on Wednesday was selecting leadership positions, including a successor to longtime clerk Pa...