Experts call state nitrate problem serious. Can we solve it? 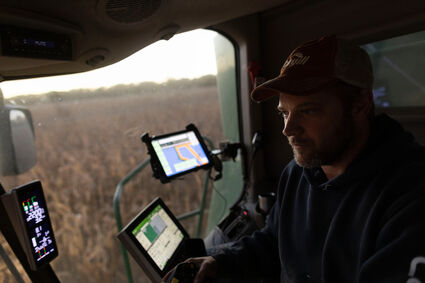 Farmer Jason Othmer operates a combine as he harvests corn near Vesta, an unincorporated community in Johnson County, on Oct. 18. Two dozen experts broadly agree that Nebraska agriculture needs to take voluntary steps, like more education, more technology and less use of harmful farming practices, in order to reduce the level of nitrate seeping into the drinking water. But that consensus breaks down when more aggressive steps, like a mandate that would cap fertilizer use, are discussed.

Pretend for a moment that Nebraska somehow halted all use of nitrogen fertilizer – not a single speck more on our lawns, golf courses and corn fields.

"It's there, it's moving towards the groundwater, and there's not a thing we can do about it," said Don Batie, a farmer near Lexington who serves on the Nebraska Natural Resources Commission.

That legacy makes it crucial that Nebraska react more seriously to our nitrate-in-water problem in 2023, said two dozen experts interviewed for this story.

The stakes are serious: Nebraska's median nitrate level has doubled since 1978. High levels of nitrate in drinking water have been linked to pediatric cancers. And Nebraska has the highest pediatric cancer rate of any state west of Pennsylvania, according to the Centers of Disease Control and Prevention.

There is broad consensus in some areas. Nebraska needs to boost existing programs that can at least moderately reduce nitrate, those interviewed say.

There is also agreement that Nebraska must spend millions more to safeguard drinking water, though many of those interviewed say that costly filtration systems aren't a long-term fix.

The consensus crumbles when some experts float more stringent steps.

And, maybe most controversially: Mandate how much fertilizer Nebraska corn farmers can use.

"The last thing that anything wants is the federal government to come in and boss everyone around on this issue," says Logan Pribbeno, a fourth-generation rancher who has implemented various conservation practices at his family's Wine Glass Ranch near Imperial. "They aren't gonna get it right."

Tim Gragert, an outgoing Republican state senator from Creighton, has grown frustrated with the current system – one in which there's no penalty for farmers who pollute Nebraska's water supply.

"I'm all about local control until local control doesn't happen," he said, referring to NRDs and their locally-elected boards, which are tasked with protecting groundwater quality. "Nobody wants mandates. I get it. But the voluntary system is simply not working."

For decades, experts have sought to educate farmers on how and when to apply fertilizer, and how much to use on their corn.

Serious progress has been made, says Ray Ward, the founder of Ward Laboratories in Kearney.

He would know – Ward, 85, is known as the dean of water and soil testing in Nebraska.

Over the decades, heeding the advice of experts like Ward, many Nebraska farmers have lowered their nitrogen usage by roughly a third per bushel of corn grown.

No one, including Ward, thinks that's enough.

More farmers need to move away from fall application, the longstanding practice by which farmers fertilize after harvesting in the fall. It's easier for the farmer, Ward said, but worse for our water.

"Why have six to eight months of nitrogen in the soil, with nothing using it, and then we wonder why it goes into the water?" Ward said. "I tell farmers, 'Maybe it's time to do chores again. Feed the corn when the corn needs to be fed, not when you want to put the feed out there.'"

It comes back to education, the argument goes. Reach more farmers – for example with Gragert's recent bill LB925, which emphasizes farmer-to-farmer education – headway can be made while farmers save money.

"It really a win-win-win for the producer and the public and for the environment," Gragert said.

But there's one snag, other experts say: Nebraska has been trying similar plans for decades.

"I think it's fair to say that it hasn't been effective. We're still left with the problem. So then, the question becomes: What else could we do?"

Silvia Secchi, a University of Iowa professor who researches the environmental impacts of agriculture and water sustainability, thinks people inside the ag industry – and even economists who study it – need to consider upsetting the status quo.

The government could eliminate subsidies that encourage people to farm on flood plains, she said.

She and several others said the government could incentivize the growing of other crops, like alfalfa, wheat and oats, that were once more widely grown in Nebraska. These crops don't need nitrogen fertilizer.

What's needed, Secchi thinks, is farm policies that protect soil and water, in ways that still allow farmers to make a living.

"We have a right to ask for a policy that doesn't shoot ourselves in the foot," she said.

Schutz, the water law expert, wonders about helping cities and small towns that are on the hook for millions to clean up nitrate-laced drinking water. Currently, the largest polluters – including giant feedlots, or those who wildly over-apply fertilizer and apply in the fall – pay no cost for that cleanup.

"When I go out and run in the spring (along the trail) there will be litter and beer bottles," Schutz said. "And I have joked we should pay those folks to pick up the stuff they dropped."

"No one thinks of it that way, because we have a strong anti-littering ethic. We don't seem to have the same ethic when it comes to land uses and environmental harm."

Gragert said the way regulation is organized – the NRDs in charge of farming, the Nebraska Department of Environment and Energy in charge of concentrated animal feeding operations – leads to turf battles. He said he's seen situations where the state provides permits for a new feedlot, "within a watershed or an area that's already way high in nitrate."

"There is a lot of finger-pointing going on," Gragert said. "That isn't solving anything. What's actually important is the NRD and the NDEE start working together to fix this. And again, currently, they are not."

Jesse Bell says he understands the frustration from all angles.

Bell is a University of Nebraska Medical Center public health expert who grew up in Bloomfield, pop. 986. He has worked for the CDC, and he has also worked building hog barns.

Now he's part of a team studying why and how nitrate is contributing to health risks in Nebraska.

Any solution must be workable, he thinks. It must be realistic. But any solution also needs to keep the focus on Nebraska farmkids, much like he once was – Nebraska kids who continue to get diagnosed with pediatric cancers at higher rates than almost anywhere else in America.

"As far as I can see, we have a water-quality issue in the state, and that water-quality issue has potential health impacts, especially on children," said Bell, director of UNMC's Water, Climate and Health program. "My goal in all of this: How do we reduce risk in those kids? That's the first thing I want to try to tackle."