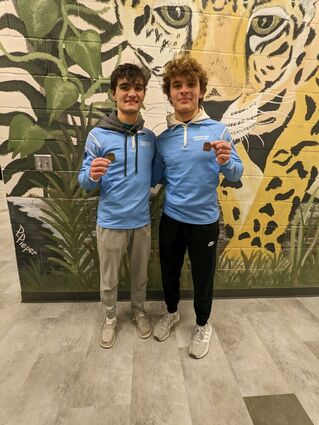 Thiele won four matches en route to the awards stand in the 120-pound division. He started with a win over Austin Hinkle, EPPJ, by fall, in 1:10 and pinned Ryker Koenig, of Archbishop Bergan, in :51. In the semifinal, Thiele pinned Brenynn Ames, of Lutheran High Northeast, in 1:32. Thiele earned a 13-6 decision of Hugo Sanchez, of Madison, in the championship.

Ethan Kester earned the bronze medal in the 126-pound division. Following a bye, Kester pinned Damian Flores, of AB, in :20, setting up a semifinal match against Carter Beckman, of EPPJ. Beckman pinned Kester in 1:21.

In the consolation round, Kester pinned Grady Drueke, EPPJ, in 1:48, setting up a third-place match against Ethan Coufal of Howells-Dodge. Kester worked quickly in the match, pinning Coufal in :59.

In the 132-pound division, Jesse Thiele placed fourth. Thiele lost an opening round match, 6-3, to Oakland-Craig's Oliver Johnson. He started the consolation round with a win, by fall, in :41, over Logan Meyer, AB. Thiele pinned Levi Uecker, LHNE, in 1:47, and Isaac Hemenway, EPPJ, in :54.

That win set up a rematch against O-C's Johnson, with Thiele claiming a 2-1 decision. In the third-place match, Thiele forfeited to Alexander Molina, of Madison.

Keaton Thiele finished sixth in the 160-pound division. He started the tournament with a win, by fall, in 3:14, over Carson Tomasek, of Stanton and defeated Gavin Hardeman, Lyons-Decatur, by fall, in 1:44. In the semifinal, Alex Braniff, TH, defeated thiele, 7-0.

The loss sent Thiele to a consolation semifinal match against Jacob Koehn, of C-L, who pinned Thiele in 3:15. Thiele dropped a 6-3 deceptions to Josh Mace, AB, in the match for fifth.

AJ Hobbs earned a first-round win over Wakefield's Diego Rubelcaba, with a pin at the 3:20 mark. Hobbs faced Keegan Poppe, of W-P in the quarterfinal, losing by fall, in 2:23.