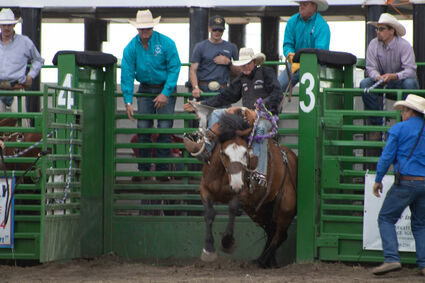 Top event • Clearwater's Big Rodeo receives the Mid-States Rodeo Association rodeo of the year honors for 2022. Competitors from the region compete in the a event, held the last weekend in June.

Three in a row.

Clearwater's Big Rodeo, sponsored by the Clearwater Chamber of Commerce, received it's third consecutive nod as the top large purse rodeo by members of the Mid-States Rodeo Association.

The award was announced Monday, via MSRA's social media channels.

In 2020, the rodeo was rescheduled to mid-July, due to the COVID-19 pandemic. Several rodeos were canceled that year, as a result of directed-health measures in place, but Clearwater Chamber officers worked with North Central District Health Department to ensure a safe show for everyone involved.

The rodeo brought home top show honors that year and they repeated as the top large purse rodeo in 2021.

An additional building project, which will feature office space, a meeting room and storage, is in the works.