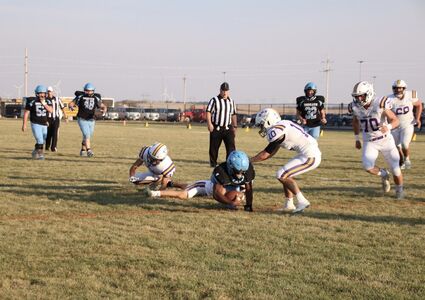 Dive in • Jaykwon Petite cuts between two Bridgeport defenders in Thursday's 28-14 Bobcat victory over the Bulldogs in the first round of Class D1 football playoffs, played at Summerland. The Bobcats travel to Cedar Rapids, Friday, to play the Riverside Chargers. Kickoff is slated for 6 p.m

The Bobcats held off what could have resulted in a late charge by the Bulldogs to secure a 28-14 win, Thursday, at home.

Against Bridgeport, Jaykwon Petite completed 50% of his passes for 94 yards. Michael Koenig finished three for three, for four yards.

Thomson led the receivers, too, nabbing five passes for 52 yards. Alec Schindler, who caught the opening...