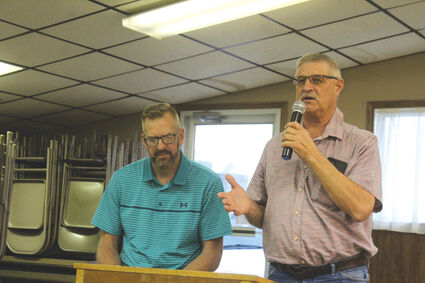 Gauging interest • Sons of Clearwater members Kelly Kerkman and Bill Thiele lead discussion with residents about potential construction of a community center. The Sunday evening meeting drew more than 50 individuals to the question and answer session held at the American Legion.

A straw poll taken during a Sunday evening meeting showed a majority of the audience favored construction of a community center in Clearwater.

More than 50 residents attended the meeting, held at the American Legion and led by Sons of Clearwater members Kelly Kerkman and Bill Thiele.

According to Kerkman, Sons of Clearwater is “a spinoff of the Sons of the Legion” when the former hardware store was acquired and eventually, the Clearwater Cafe property.