By Joan Wright
For SAM

Changes in store for Catholic churches 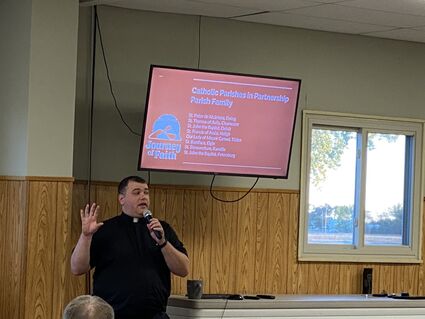 Time for reflection • Fr. John Norman, current pastor of six northeast Nebraska parishes, speaks during a town hall meeting in Ewing Saturday evening. Norman told approximately 60 persons in attendance the Archdiocese of Omaha will only accept one of two options for restructuring eight local churches. Options include either closing two churches or restructuring the eight campuses into two.

The answer was no.

After months and months of collaborating, planning, meeting and devising a possible solution to continue celebrating Mass at eight area Catholic parishes, the local Pastoral Planning Committee was told their changes were "inadequate."

Father John Norman, current pastor of six parishes, soon to be eight; told attendees at a town hall meeting in Ewing, Saturday evening, that Fr. Scott Hastings, vicar for clergy and judicial vicar for the Archdiocese of Omaha, said no to a proposal put forth by committee members representing the Catholic churches in Ewing, Clearwater, rura...