Nebraska media 'leveled up' in past year with new outlets 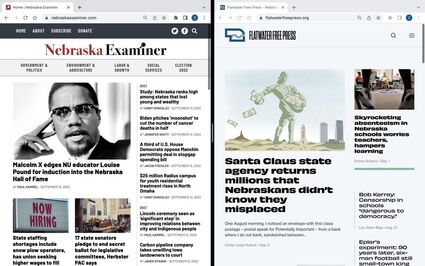 The online landing pages for the Nebraska Examiner (left) and Flatwater Free Press (right) are juxtaposed in one screenshot taken on Tuesday, Sept. 13, 2022. Both are new Nebraska publications that started in the past year.

Ed. note: This piece is included in UNL's Democracy Day project, a national intiative where more than 300 news outlets published stories about democracy in the United States.

In just a little over a year, Nebraska's media landscape has expanded to uncover and shed light on more undercovered stories with the addition of two new publications.

The Flatwater Free Press, which published its first stories on Sept. 3, 2021, preceded the launch of the Nebraska Examiner four months later on Jan. 25, 2022. Both have counteracted a more-than-decades-long decrease in...