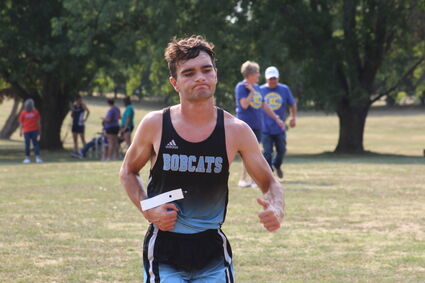 Pushing through the pain • Alex Thiele grimaces as he nears the finish line in the boys' division race at the Boyd County Cross Country Invitational, Sept. 8, at Butte. Thiele, who broke an ankle during the 2022 wrestling season, occasionally is hampered by the injury. He finished 15th in the race

The meet, held Sept. 8, at the Butte Golf Course, was originally slated to start at 4 p.m., but due to impending high temperatures nearing the century mark, officials bumped the start time to 10 a.m.

Yet, temperatures neared the mid-80s when races started and reached above 90 during the awards ceremony.

In the high school girls' division, Aislynn Kester led the Bobcats, finishing ninth. She completed the course in 23:02.

Carlee Livingston was half a minute b...