Who's making the decisions? 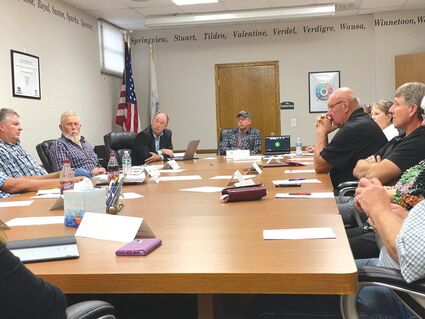 Concerns • (l-r): North Central District Health Department representatives Dean Smith and Dustin Breiner, Governmental Law, LLC, attorney Patrick Guinan and NCDHD board representative Tom Kuether listen to discussion about the organizational structure of the board during Friday's board of health meeting in O'Neill.

The North Central District Health Department board of health faced several questions from some of its own membership, Friday, when the group met in O'Neill.

Concerns about the structure of the board of health and powers granted to an unidentified executive committee, legal representation, the district's computer system policies and lack of complete inventory, were expressed.

James Ward, a Cherry County Commissioner serving on NCDHD's board, asked what action was taken, and when, to form an executive committee on the board of health.

Ward said, "A few emails were popping around that said, '...