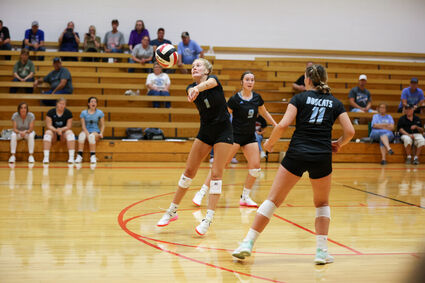 Preslie Robertson (middle) receives a serve and sends it to the front row during a match, Thursday, against Plainview. Ella Bolling (9) and Adyson Mlnarik move into position during the play. Summerland defeated St. Mary's in two sets and swept the host team, Plainview, in two sets.

With the wins, Summerland advances to 6-0 on the season. They were slated to play at in a double triangular at Niobrara/Verdigre, Tuesday evening. Games had not started prior to press time.

On Sept. 8, the Bobcats will host Norfolk Catholic and Battle Creek, with matches scheduled to begin at 5 and 7 p.m.